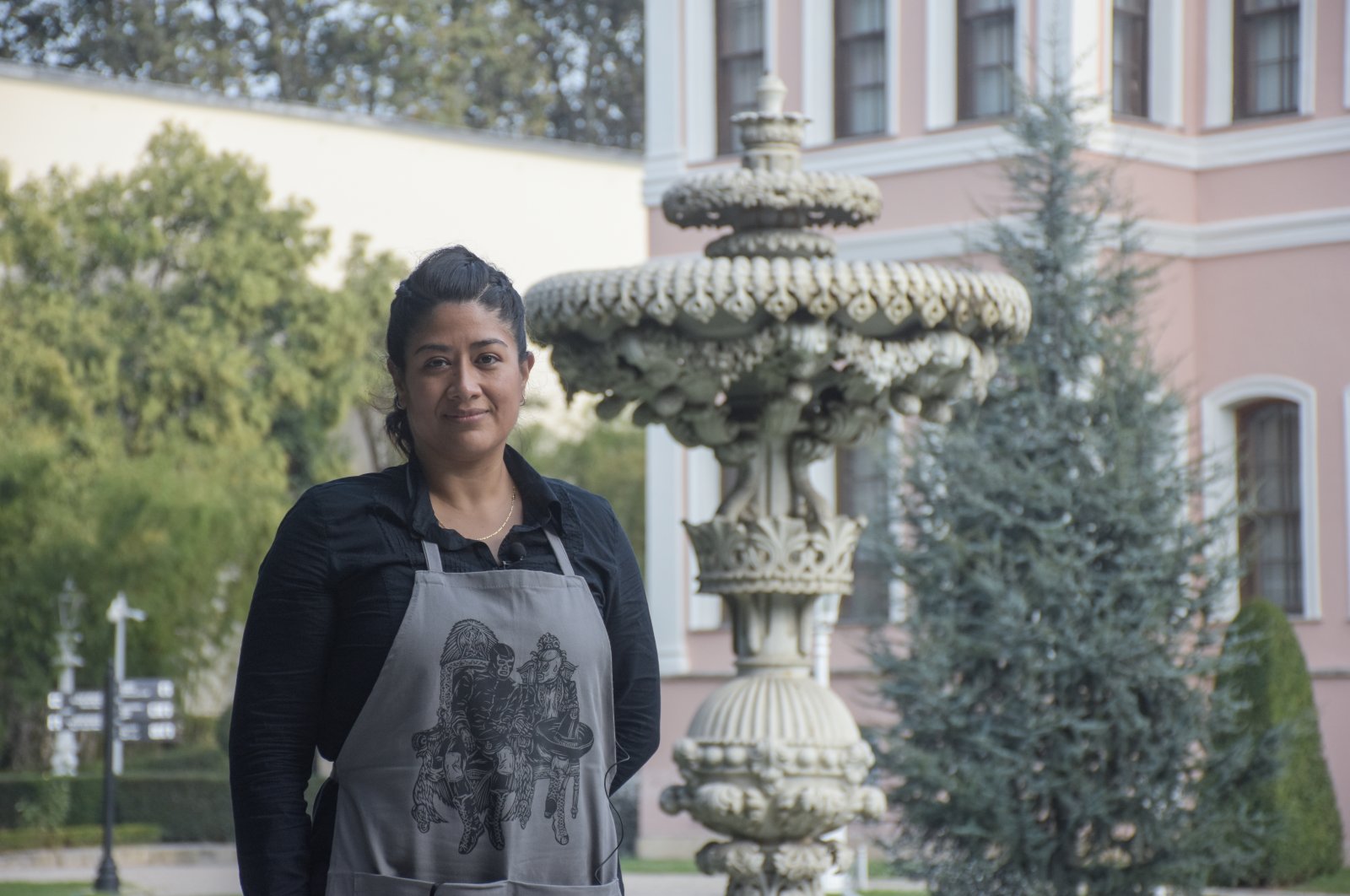 Mexican artist Sofia Chavez, who has settled in Turkey after traveling the world for the sake of the arts, is learning traditional Turkish arts at the workshops of the mesmerizing Dolmabahçe Palace

Living abroad has become an increasingly popular choice for professionals and retirees in today's world, with Turkey having much to offer as a second home for expats. One of these foreigners is Mexican artist Sofia Chavez, who is currently learning from the masters of Dolmabahçe Palace’s restoration workshop in Istanbul.

Globetrotter Chavez has visited 65 countries on her art-based travels since the age of 20. On her 66th stop in Turkey, the artist decided to settle down and is currently learning Turkish arts at the spellbinding Dolmabahçe Palace.

Having started her artistic career painting in high school, Chavez, now 43, studied architecture at a Mexican university before embarking on an artistic journey in which she would travel thousands of kilometers exploring the cultural and artistic riches of the world.

She studied in a number of countries in South America and received architectural and painting training in Italy and Canada. She later went to Spain since she was a fan of architect Antoni Gaudi's work, then on to Scandinavia where she learned furniture design before studying calligraphy in Singapore. During her visits, Chavez soaked up both the culture and the arts of the region.

The artist visited the museums, art galleries and important architectural structures in the countries to which she traveled and took special courses from local artists. Chavez's life, in a nutshell, is a collection of "journeys fraught with art," with her latest journey bringing her to Istanbul, where she began to blend Turkish and Mexican artistic styles.

She took courses in marbling, calligraphy, illumination and bookbinding from various artists in Istanbul over four years. Currently, she continues her artistic journey with binding master Ahmet Kurnaz at Dolmabahçe Palace’s Binding Restoration Workshop, which she was granted access to due to her interests and talents.

Speaking to Anadolu Agency (AA), Chavez said that she left Mexico at the age of 20 to learn world art forms, different art movements and techniques. She said that, after traveling to 65 countries, she was looking for a country that would direct her art career where she could stay for a long time after years of traveling. "I have been on the road my whole life. I have traveled for art. Finally, I wanted to leave my country because of problems there and live in a country that would be better for my art. I decided that Turkey was the right country to step into a new life," Chavez said.

Noting that she was impressed by the cultural differences in all the countries she has visited, Chavez touched on her experiences in Turkey saying: "Before I came here, I thought our cultures were similar. But after I came, I saw that they were actually very different. I have gotten used to it over time and I am learning a new thing every day here."

'Turkey is my home'

The artist noted that she was impressed by Istanbul's cultural and artistic atmosphere when she first arrived, expressing that the city is among the most beautiful of the hundreds of cities she visited in dozens of countries.

Highlighting that she came to the country due to her love of the arts, Chavez added: “I came here to smell history and feel freer. This place makes me so happy." Chavez began language lessons when she first moved to Turkey but quit and learned Turkish on the streets, helping her quickly improve her proficiency.

Chavez said that, other than the art, Turkish cuisine really surprised her. "I like everything in Istanbul, including the buildings, patterns, food, culture and people. I am always learning new things about Turkish culture here. There is always a cross-cultural synthesis. But Turkey is my home now. That is why I like everything in this country," she said.

Noting that adjusting to Turkish food was one of the most difficult aspects of moving to Turkey, Chavez said: "We, for example, eat yogurt only when we are sick. However, it is one of the indispensables of Turkish meals. After spending some time here, I started to miss eating yogurt when I visit my homeland Mexico. It is the same with tea. We drink it during our illnesses. But Turks like it very much and drink it every day."

Noting that she always brings walnuts, Turkish coffee and pastırma (a Turkish delicacy made of pressed beef cured in red pepper and garlic) on her visits to Mexico, the artist added that Turkish coffee is one of the most delicious coffees in the world. "When I tried Turkish coffee for the first time, it tasted very sweet and burnt. It was very strong. Now, I can’t stop drinking it," Chavez said.

Chavez touched on the success of Turkish television series around the world, noting that Turkish TV shows have become among the most-watched series in her country in recent years. "At dinner, Mexicans always talk about Turkish TV series. Mexican women watch all the series and want to come to Turkey and even marry a Turk. But I think Turkey is more than a TV series. It is a country with rich culture and art," she said.

As an art lover, Chaves also shared her thoughts on Turkish music. "I like old Turkish music more. I think their lyrics are more meaningful. Their rhythms are better as well. I was already learning to play the bendir, but I discontinued due to the coronavirus outbreak," she said.

Kurnaz, the head of Dolmabahçe Palace’s Binding Workshop, said working with Chavez has been a pleasure. "I have been working at the restoration workshops of National Palaces since 1988. I am working on binding and paper restoration. Young people, unfortunately, do not take much interest. We want to train them and work together," he explained.

"Sofia came as a guest last year. She had done such works before, traveled to many countries around the world, learned different binding arts, and then came to our country. We are striving to teach her classical and Ottoman binding art as much as we can. She is a very successful, earnest artist. I can say that we are mutually teaching each other things here. The art of her own country is different. Hopefully, we will blend the arts of the two countries and create new artifacts," Kurnaz said.