Spotlight: The Ottoman art historian who prevented Hagia Sophia from being destroyed 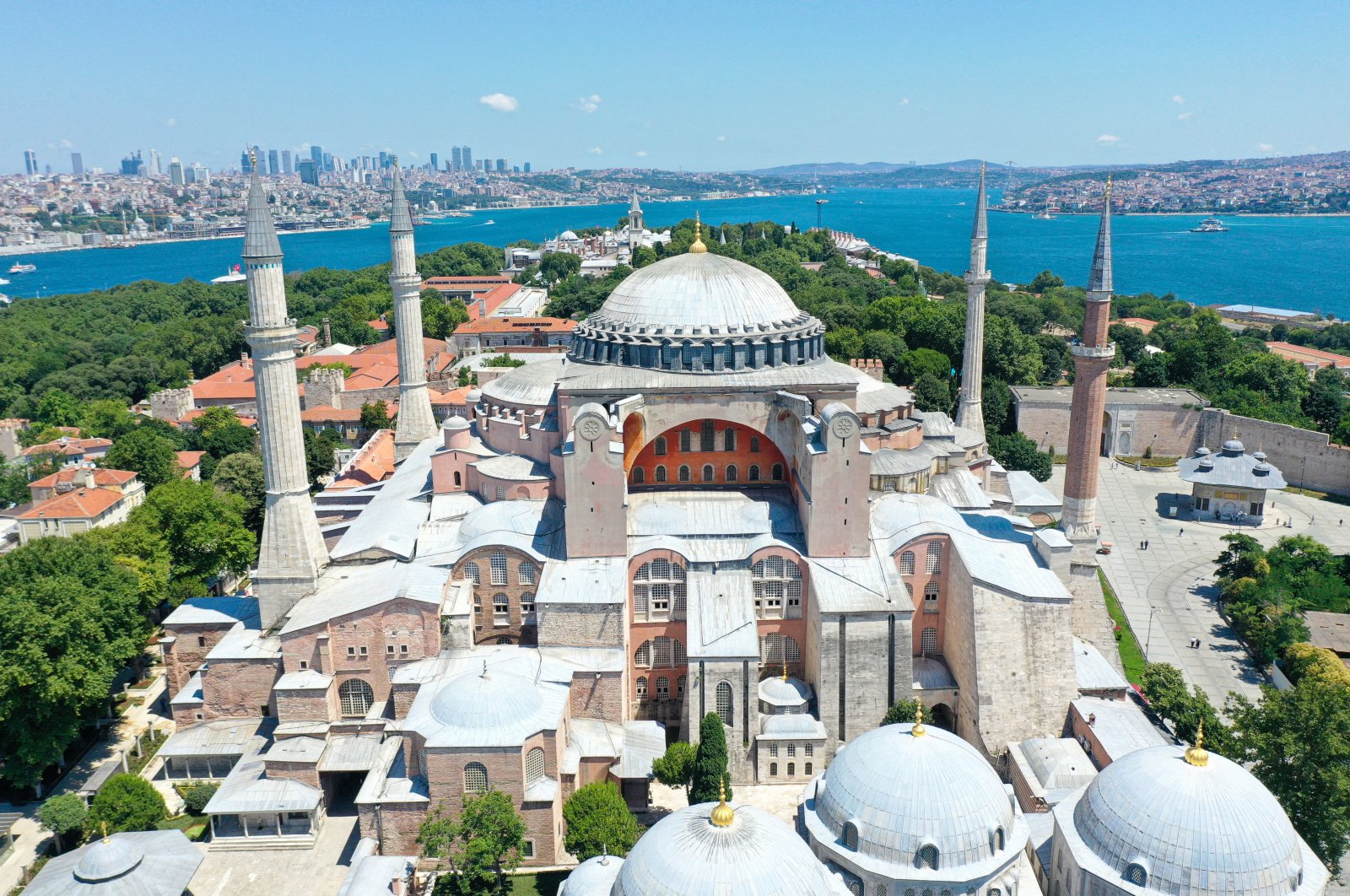 The status of Hagia Sophia has officially been reverted back to a mosque and has commenced service. This change was spurred by a violation of the law of foundations. Contrary to popular belief, this was not a return to 500 years ago but to recent history. It was compensation for a mistake made 86 years ago.

The early days of revolutions can bring about some seemingly unfair decisions and strict practices. But revolution law is different. Over time, however, the gradual return to normal begins. The first waves of the French Revolution were quelled by Napoleon Bonaparte a few years after it broke out. Mikhail Gorbachev and Boris Yeltsin tried to erase the over-the-top behavior of the former Soviet Union after 70 years. Today, many of the world's states are changing the laws and practices they adopted 70, 80 or even 100 years ago.

What has been done is the correction of contradiction which came about at the speed of a revolution. Because, on one hand, historical artifacts were opened to public use with the Law for Foundations, while on the other hand, Hagia Sophia was declared a museum with a decree that was against this law. But in reality, it was registered as a mosque both on its deed and foundation charter.

As in every period of history, then, too, there were more Catholics than the pope himself (or more royalists than the king, if you wish). In the early years of the Republic of Turkey, various people went overboard with the republicanism and wanted to erase completely the history of the Ottoman Empire. Many works of Ottoman legacy, especially in Istanbul, faced such behavior. The liquidation of such assets, namely works established by foundations, is the topic of another article.

While these faulty policies were being applied left and right, those who appreciated these historical works were trying to save them by making up various excuses. At this point, one of the most successful names that come to mind is Ibrahim Hakkı Konyalı, an art historian, writer and inscription expert.

Born in Konya in 1896, Konyalı's ancestry goes back to the Anatolian Seljuk dynasty. During the reign of Sultan Abdülhamid II, he studied at a madrassa (modern-day university), following his high school (rüşdiye) education. Influenced by Islamic scholar of the Ottoman era Ibrahim Hakkı Erzurumi and his famous "Book of Gnosis" ("Marifetname") he decided to adopt the name of Hakkı. After graduation from the Şimendifer (Railway) School which was opened during World War I, he became one of the first railway experts of the empire.

Konyalı, whose first government role was of station manager, later became a Turkish teacher for a while. Later on, he served as deputy lecturer at the Istanbul Office of Islamic Law. He worked as a specialist in the Archives of the Prime Ministry, General Directorate of Military Museums and Foundations. The General Directorate of Foundations had a large share in the establishment of the Turkish Foundation Museum of Calligraphy.

'How I saved the minarets of Hagia Sophia'

Dabbling in writing as well, Konyalı wrote for many publications of the period. Writing historical articles mainly for newspapers and magazines, he also published his own magazine for a while. When he passed away in 1986, he had become one of the most well-known figures of recent history. One of the most important services he did for historical artifacts was to save Hagia Sophia Grand Mosque from being destroyed. What he did at that time made him all the more important.

He was, indeed, a writer whose historical conscience was very strong. He demonstrated a high level of sensitivity on matters pertaining to anything historical, namely historical works, monuments, books and inscriptions. Therefore, he did not hesitate to criticize the wrong practices.

He also went down in history for noting all the wrong practices during the conversion of Hagia Sophia into a museum. In a three-day article series titled "How I saved the minarets of Hagia Sophia" ("Ayasofya Minarelerini Nasıl Kurtardım") on Nov. 20, 1977, he describes a sad incident in 1936. Here, he explains how Hagia Sophia's minarets and the building itself was saved thanks to a report he ordered prepared after a verbal order wanted it to be demolished.

He says in this article: "One day, the director of Istanbul Museums Kemal Akan came to me, his eyes a fountain of tears. I was bewildered ... Something really bad must have happened to leave Kemal Bey like this. 'What is it, what happened?' I asked. 'They destroyed it, they destroyed it tonight. They destroyed the pheasant-like minaret overnight,' he said, continuing in a broken voice:

"The director of the Istanbul Archeology Museum Aziz Oğan called me the day before. 'We will demolish the large and small minarets of Hagia Sophia,' he said. The minaret of Little Hagia Sophia (formerly the Church of Saints Sergius and Bacchus), which was a masterpiece of Turkish architecture and made of neatly cut stones, was destroyed right down to its very foundation until the early hours of the morning near Kadırga. (The current minaret of Little Hagia Sophia, which was minaret-less for a long time, was rebuilt in the Adnan Menderes era in 1955.) Tonight, the minarets of the Great Hagia Sophia will also be destroyed!' I put his mind at rest. I told him to sit down. They cannot destroy the minarets of the Great Hagia Sophia. Let's write up a report. I'll speak, you write.”

Addressing the report they prepared to the relevant authorities, Konyalı explained several matters, including the construction date of Hagia Sophia, the damage it sustained from earthquakes, the renovation works carried out in the Byzantine and Ottoman periods, the importance of reinforcement work such as buttresses and minarets erected on the building, particularly by the famous architect Mimar Sinan.

He concludes the report as follows: “Now, this old temple has grown even older. Minarets are the last buttresses on which the main dome rests. If the minarets are destroyed, the dome will fall to pieces. And the Christian world waiting on alert will cry out about how the Turks destroyed the great Hagia Sophia.”

"Mr. Kemal Altan handed this report to those concerned and the demolition of the minarets was scrapped," he says in his final sentence.

His works didn't stop there

What Konyalı did to protect historical monuments is not limited to these activities. He was the first to find the maps of Piri Reis, a pioneering Ottoman navigator, geographer and cartographer, and had them published. He informed the public about the situation of the Ottoman archive documents sold to Bulgaria by writing reporting them about first. Then he assured that some of these documents would be taken back. Having the biggest share in the establishment of the Military Museum in Istanbul’s Harbiye, he also founded the historical Mehter, the Ottoman military band, here. He made great efforts to discover, protect and save historical artifacts in many subjects, among which stand out, in particular, his services for the Museum of Turkish Calligraphy Art, located in Beyazıd Square in Istanbul's Fatih district.

He donated all the documents, photographs and printed media he collected throughout his life to the Ibrahim Hakkı Konyalı Foundation's Library and Archives, which was established in 1979 by the General Directorate of Foundations in Istanbul’s Üsküdar district. Konyalı was granted an Outstanding Service Award in 1979 by the Ministry of Culture and received an honorary doctorate from Konya Selçuk University in 1981.

The works of the prolific writer, especially those on city history, serve as reference works. He wrote about the history of Konya, Karaman, Alanya, Erzurum, Niğde, Aksaray and many other cities based on inscriptions and monuments dating back to ancient times. He also has books on war history, such as the “History of the Cannon” (“Topun Tarihi”), the “History of the Sword and Other Hand-held Edged Weapons” (“Kılıcın ve Başka Kabzalı Kesici Silâhların Tarihi”), as well as other individual works on many historical buildings. All these works are also first-hand sources for today's researchers.