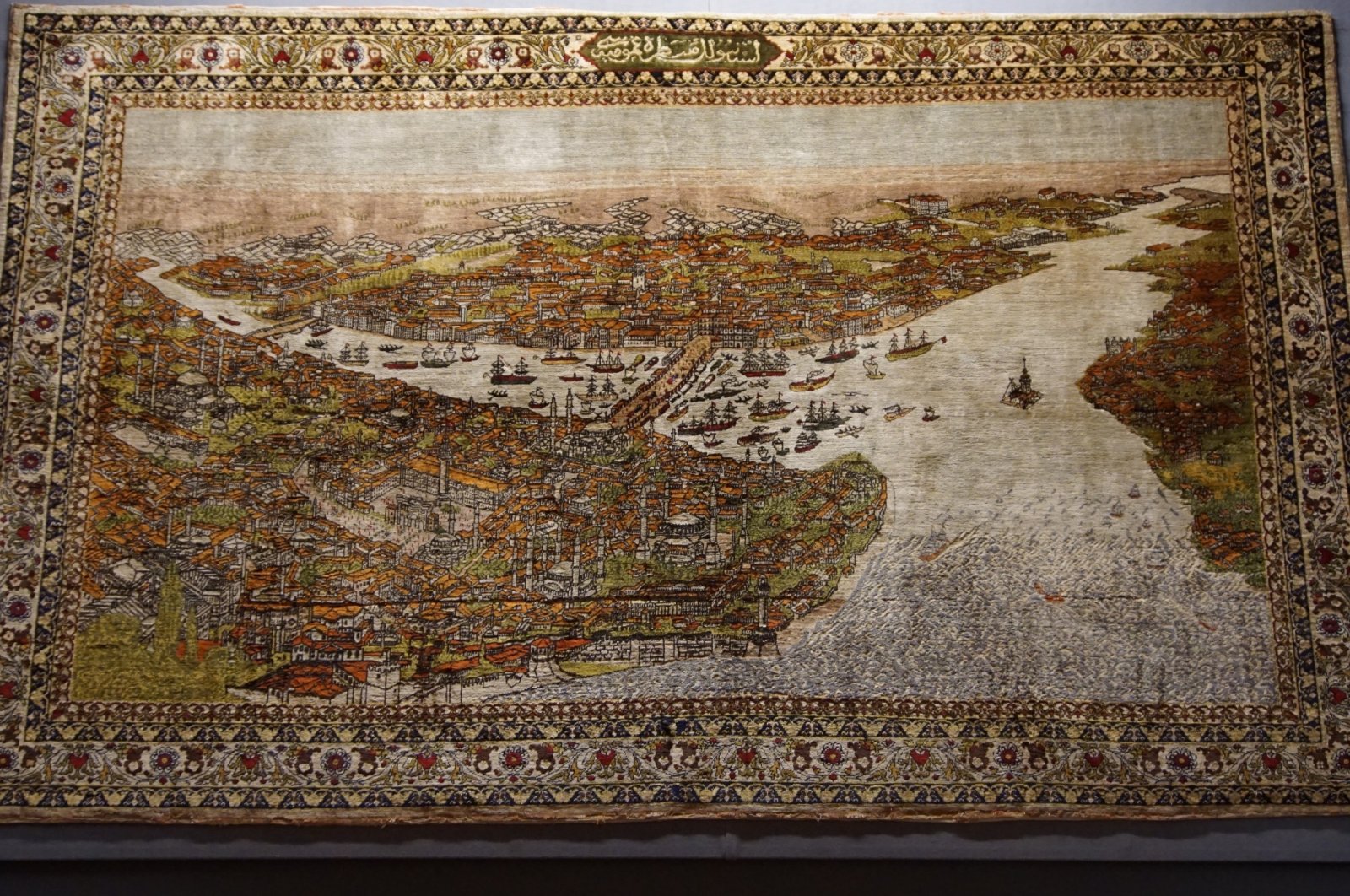 A historical artwork depicting Istanbul in the Museum of Turkish and Islamic Arts. (Photo by Murat Tarık)
by MURAT TARIK Aug 25, 2021 1:57 pm

Boasting a fascinating backstory, the Museum of Turkish and Islamic Arts is like a secret passage to the history of Islamic arts in Istanbul's beautiful Sultanahmet Square, cataloging a fascinating collection of carpets and manuscripts

When you step onto Sultanahmet Square, one of the most popular spots in Istanbul, on one side you will see the Hagia Sophia Grand Mosque, one of the most famous temples in history, and on the other, the Blue Mosque with its unique tiles.

A little further along stands the Topkapı Palace with its priceless collection, then the Serpent Column from the days of the Byzantine Emperor Constantine the Great, and of course the Obelisk of Theodosius, with its history stretching from Egypt to Rome.

However, there is another treasure that remains in the shadows among all this magnificent history: the Museum of Turkish and Islamic Arts.

Located right behind the Blue Mosque and hosting thousands of artifacts from Islamic history, the museum has a very interesting founding story. It is also the story of the archaeological plunder of imperialism in the Middle East.

From Troy: Plunder of Islamic structures

The Ottoman Empire, founded upon a rich cultural heritage on three continents, hosted various excavations by foreign archaeologists, but it was also subjected to numerous “archaeological plunders.”

The smuggling of historical artifacts from ancient cities such as Troy by names like Heinrich Schliemann is famous.

At the end of the 19th century, when the weary empire was struggling with successive wars, Islamic structures were targeted extensively. Some Westerners even began to dismantle historical religious structures that were still in use.

The important parts of mosques and other temples, such as their doors and tiles, were being secretly transported to Europe.

Journey of historical artifacts to Istanbul

At the beginning of the 20th century, the Ottoman government tried to protect the ancient archaeological remains and took action in order to protect and preserve Islamic artifacts.

During the era of Ürgüplü Mustafa Hayri (Mustafa Hayri of Ürgüp), the minister of foundations, a decision was made to move the artworks in religious places that were being plundered to Istanbul. However, given the technology available a century ago, it was not at all easy to transport precious objects to Istanbul.

Despite this fact, artifacts from numerous cities, from Thrace to Damascus, were transported to the capital: unique carpets, rare tiles, precious manuscripts and much more. All of them were brought using the means of the time.

Once the year 1914 came around, enough artifacts had been collected to establish a museum. That year, the first museum bringing together Islamic artifacts was founded as part of the Süleymaniye Complex, under the name of “Evkaf-ı Islamiyye Museum” (Islamic Foundations Museum).

After the Republic of Turkey was established, the museum was turned into the “Museum of Turkish and Islamic Arts” (TIEM). In 1925, in swiftly Westernizing Turkey, the doors of religious places such as khankahs (places for spiritual retreat), zawiyas (Islamic religious schools) and tombs were shut by the state.

This decision had limited religious freedoms, but it also meant that the second major flow of artworks to TIEM had begun.

By 1926, artifacts from shutdown religious venues were transferred to the museum. In 1983, TIEM had moved to the Pargalı Ibrahim Pasha (Ibrahim Pasha of Parga) Palace, also in Sultanahmet, and it still operates there today.

The Museum of Turkish and Islamic Arts takes its visitors on a tour of Islamic history, starting from the period of the Four Caliphs or the Rashidun – the first four Caliphs following the passing away of the Prophet Muhammad who were also his close companions.

Among its artifacts, some stand out; the “Damascus Documents,” a collection of handwritten manuscripts, sacred objects, calligraphy works by sultans who were also artists, and, of course, historical carpets.

TIEM is most famous for its collection of the most precious carpets in the world. The museum, which is also known as the “carpet museum” abroad, hosts and exhibits more than 1,700 carpets.

Seljuk carpets from the 13th century that cannot be found anywhere else are considered among the most valuable works in the museum. The bases of these carpets are known to have inspired 16th-century German artist Hans Holbein the Younger and 16th-century Italian painter Lorenzo Lotto.

In fact, for this reason, they are referred to by the names of these artists.

The fact that these carpets, which were woven from organic materials, have been preserved and have stayed intact for eight centuries overwhelms viewers with a wonderful feeling.

The museum is instilled with a strong spiritual aspect. In the “Sacred Relics” section, one can find the footprint and beard strands of the Prophet Muhammad, and the Quran that is thought to belong to Hazret-i Osman and Hazret-i Ali, two of the first four Islamic Caliphs.

One of the Qurans in the inventory of the museum is likely the oldest Quran in the world, and that possibility is currently being studied scientifically.

Every visit a new discovery

There are approximately 40,000 works in the collection of the museum, which also includes the ruins of the Hippodrome on the ground floor. However, only 10% of it is exhibited. Therefore, it is quite possible to create a few more museums from some parts of TIEM.

As such, some of the works in the warehouses are presented to art lovers with rotating displays and temporary exhibitions. In other words, it is possible to discover new treasures every time you visit the Museum of Turkish and Islamic Arts.

With the integration of the Islamic faith with art, it is possible to see in the museum quite fancy and decorated artifacts and sometimes more abstract works

The calligraphy arts of the Ottoman Empire meanwhile, stand out as the pinnacle of all artworks. The calligraphy works of rulers, such as the Ottoman Sultan Abdulmejid I, on the other hand, can be read as an indication that the interest in art spread from the palace to society.

When you leave the museum, which is organized chronologically, you gain a better understanding of the aesthetic richness of the Islamic states that dominated a wide and varied region from the borders of China to the Adriatic Ocean, and you find yourself in a state of contemplation.