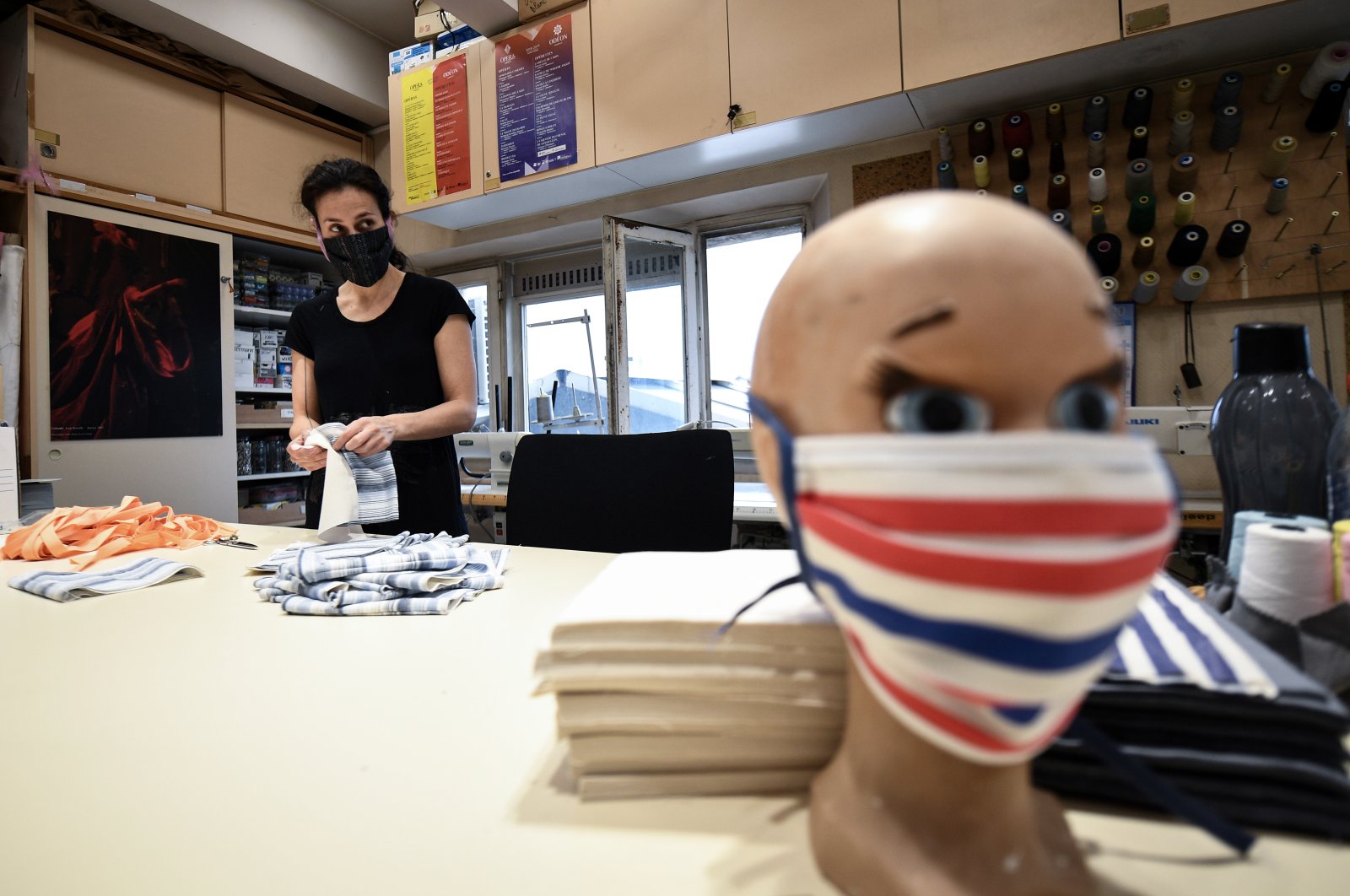 A seamstress from the Opera de Marseille makes face masks out of fabric in the sewing workshop of the Marseille opera house, April 20, 2020, in Marseille, southeastern France. (AFP Photo)
by French Press Agency - AFP Apr 28, 2020 10:25 am
RECOMMENDED

Normally they make tutus and elaborate costumes for some of the greatest opera and ballet stars in the world.

But the costume makers from opera houses across France are now turning their considerable talents to making masks.

Since the beginning of April, Christine Neumeister, the costume director of the Paris Opera, has been driving around collecting masks 30 of her couturiers have made while locked down at home.

The first week they made 1,000 for the Red Cross and a Paris maternity hospital, and the following week they made a similar number for the Salvation Army.

Packed into "tutu bags" marked "Opera de Paris," they have to be among the chicest personal protection accessories around – although staff from the French couture houses Dior and Louis Vuitton have also been volunteering to turn their hands to mask making.

"We have the material and the know-how," said German-born Neumeister.

"It's also rewarding for us, too, to know that our work, which is an art in itself, can be useful in this moment of crisis," she added.

"My German grandmother used to say that during the war people who could make something with their hands were the heroes, the kings and the queens."

With chronic shortages of masks for the general public and even medical and nursing home staff in France, there is no shortage of takers.

The country is likely to make wearing masks obligatory in some public spaces when its strict lockdown begins to be relaxed from May 11.

Mask-making in the costume departments of opera houses across France only began in earnest after the official norms were posted online at the end of March.

Neumeister "opted for a mask with three folds which resembles a surgical one and which allows you to breath better than the duck-beak model."

She said it was made with lightweight poplin with a cotton fleece in the middle. "It has to be washable to 60 degrees Celsius (140 Fahrenheit)."

Neumeister said it takes about 20 minutes to make, slower than if her staff was working in their studio.

Isabelle Daumas and 20 of her colleagues from the Toulouse Opera in southwest France will also start turning out masks to the same high standards from Monday.

And like several staff and artists from the Capitole de Toulouse, which houses the opera, ballet and orchestra, every day she has been helping to disinfect centers set up to receive people who may have COVID-19.

At the Marseille Opera, they have gone even further, asking for their masks to get the official imprimatur of the local authorities for use by their staff.

Rather than working from home, "five or six people work each day in the studio," sticking rigidly to social distancing rules, said Aude Eisinger, who set up the drive for the local council.

With 1,000 masks a week to turn out, "we are drawing on the opera's stock of fabrics because getting fresh supplies is difficult," she added.

It's a similar situation at the Bordeaux Opera where Technical Director Yves Jouen said: "Our usual suppliers of fabric are pretty much out of stock."

There, a small group of costume makers cut the fabric in the opera's workshops before delivering them to the homes of their colleagues who do the sewing.

"We even have musicians from the orchestra who are sewers lending a hand," Jouen said.