To fly from stone: Ceramics show at Schneidertempel 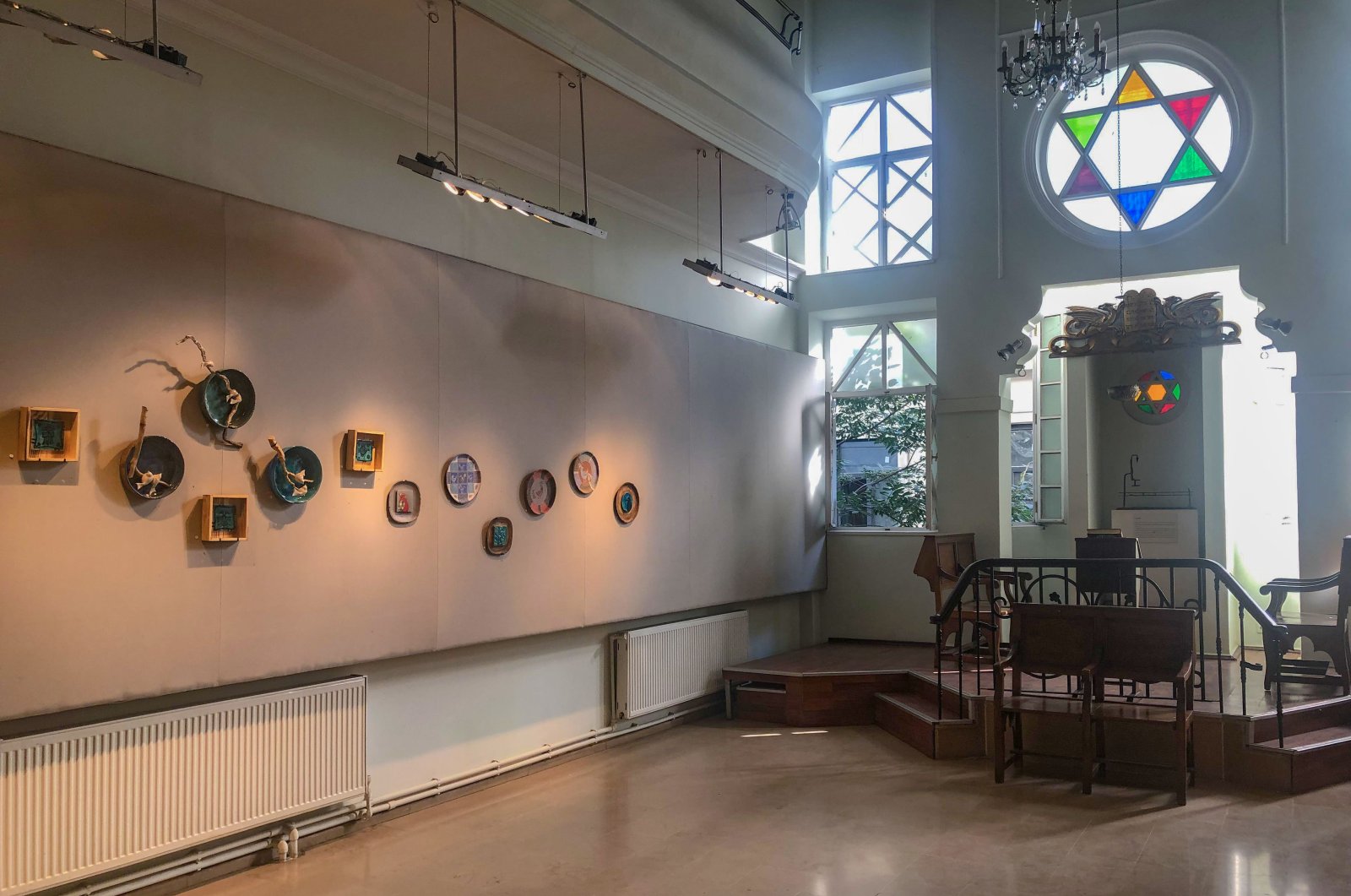 The entrance to the Schneidertempel art gallery and ceramicist Defne Küçük's “Bird Frequency” exhibition on display, in Istanbul, Turkey. (Photos by Matt Hanson)
by Matt Hanson Sep 06, 2021 9:15 am

It is not the first time that Paris-born ceramist Defne Küçük has shown her work at Schneidertempel, which is still affectionately known as the Tailor’s Synagogue by descendants of its Turkish-Jewish community of Eastern European extraction. In 2011, she mounted a show in the temple titled “Duvardakiler” in Turkish, which translates to, “On the Wall.” It is a suitable phrase for her works, which have a levity, as their sculptural elements are suspended within a more pragmatic and earthly field, such as that bounded by the form of a plate.

To Küçük, a plate holds the same inspiration and utility as a canvas does for painters. She has said as much. Her approach to the figurative is framed by the soil-based worldliness of her chosen medium, ceramics. One of her earlier works adapts Jewish iconography, particularly that of the Torah scroll. Under a faint, naive engraving of a Star of David at the top of a ruddy brown oval, she placed three likenesses of the parchment scrolls for a piece, “Acknowledgments,” perhaps a nod to where she has come to find a home for her art.

Another work, which she produced before her current avian theme, is called, “Mediterranean.” Although forming what appears to be whirlpools of seawater, the whorls bear an uncanny resemblance to her miniature Torahs, when seen from above. Her work, “Mediterranean 2” arranges various shades of blue, almost mosaic-like, or even pixellated. Its visual appeal is reminiscent of a video installation, “Bosphorus: Data Sculpture,” by Turkish new media artist Refik Anadol.

The merging of ultramodern aesthetics with that of prehistoric tradition is a part of the superlative gift of a contemporary ceramic artist, a stream of artistic craft that runs deep in Turkey’s complex grasp of cultural modernism, from Füreya Koral to Alev Ebüzziya Siesbye. Trained in archaeological art history, much of Küçük’s work stems from her appreciation of the ancient past. The appearance of age, of faded surfaces and worn imperfections, characterizes her oeuvre, which echoes everything from Ottoman cemeteries to Hittite reliefs.

Another chip off the block

In her artist statement, Küçük speaks on behalf of her muse: birds. Animals who, as she quotes, are philosophically inclined. She proclaims that they are right when they affirm that everyone enriches the Earth and the greater multiverse, embodying different frequencies, yet within the same wholeness. It is after this frequency or vibration of birds that Küçük has delivered her latest series of sculptural ceramics, departing from the plate to tree branches, from domestic practicality to pure decoration.

Although manifold in form, Küçük’s painterly expressionism captures the musicality of avian harmony, not by the sound of their songs, but by the color of their feathers. Her works in “Bird Frequency” explore spectra of color as yet unseen in her previous creations. Yet, as with her piece, “Hamuşan,” titled after an Ottoman word for Sufi cemeteries, Küçük plumbed the depths of Turkish art history, using the octagonal star that remains ubiquitous in the tangible heritage of Islamic Istanbul to adapt the shape of Turkey’s medieval tombstones

In an era of social engagement and radical intervention in the art world, the quaint modesty of “Bird Frequency” is, while perhaps anachronistic, a refreshing delight of a detour off the beaten path of the international cultural establishment as it reaches for exposure and legitimacy along Istanbul’s European fringe. Küçük faces her seers from another vantage point, one steeped in the quiet poise of nature, nonetheless proud and full of the kind of beauty that is visible on a bird’s feathers, one so fickle, distant, finally captured to timeless effect.

Küçük wrote a personal reflection to preface the works that grace the walls leading to the Ashkenazi altar, as the light of the city’s marine ecology filters through the multicolored stained glass and into the historic house of worship for Yiddish-speaking Black Sea migrants. She thought of her childhood, when she lived in attics, close to birds. That her art speaks to her inner child, and from a girl’s perspective, might conjure thematic parallels to the work of Turkish American painter Ayşe Wilson.

Her memories in flight

The artist still lives in an attic, only now she calls it the terrace floor. It is something mythological to imagine a young person looking out of the tops of an apartment building in Paris, dreaming of becoming an artist, watching as the wings of birds flap, carrying them away. Some of the more migratory ones maybe even travel as far as Istanbul, a place of perennial dreaming for French painters down the ages, such as for postimpressionist Paul Signac, whose pointillist pictures of fin de siecle Istanbul remain at the center of art curation in Europe.

The delicate immersion of Küçük’s ceramic birds are profound, as they stand in relation to the geometric designs of their environment. One piece has a varied aesthetic of blues, quoting from the primeval line etchings that have chronicled the course of human creativity since the Neolithic era. And she even adds a touch of Japanese philosophy, namely that of the “kintsugi” technique, in which pottery is broken and reattached, its cracks gilded, accentuated, so as to celebrate the wonders of imperfection, the vulnerability of material, and being, to life.

The birds that she pictures are magically realistic, fusing a sense of pointillism and mosaic into a flat, miniature fold. The tufts that seem to waver atop their heads are majestic, like crowns, or vegetal headdresses, and their wings, also become plantlike, particularly in a plate that is mostly green in its coloration. Küçük demonstrates certain skill as a painter, as the pieces are largely comprised of sketches etched over the surfaces of her ceramic works. But she also crafted the effigy of a bird in one teal-hued square set within an earth-brown bowl.

Many of her fellow ceramists, and to a great extent many folks who stream through the commercialized alleys of Galata, might see her work as derivative, fit for a shop but not a unique show in a gallery. They would have a point, but the plainness of a white, featureless dove grasping an artificial branch in the congregant hall of an empty synagogue is no less poignant, its relevance perhaps demanding a stretch of the imagination to see just how nature and history often meet along points of their mutual vanishing. And in walks art.