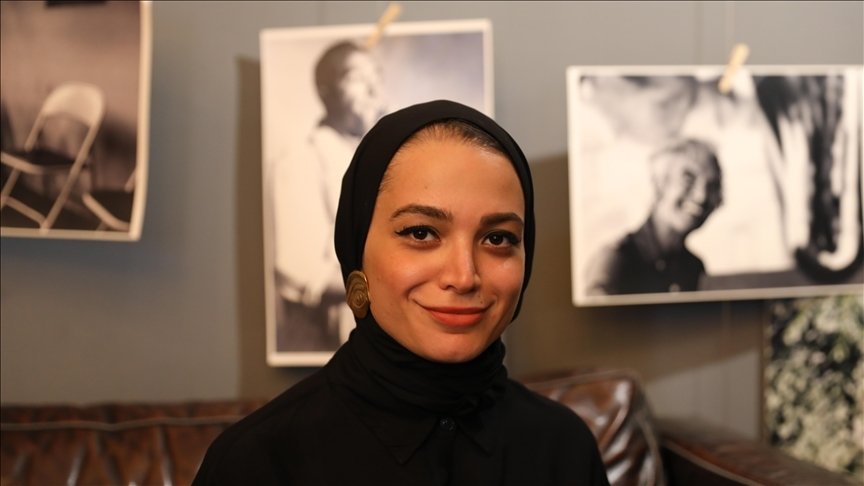 Turkish artist and activist Melek Zeynep Bulut creates unique pieces of art by using her synesthesia condition, a neurological disorder, to her advantage. Her work is based on highlighting themes of human rights, migrants and the vulnerable.

Synesthesia is a neurological disorder in which the information sent by the brain to stimulate one of the senses incites involuntary experiences in other senses as well. Bulut uses this ability to transform and combine different senses, such as smelling textures, hearing colors or tasting sounds.

Speaking to Anadolu Agency (AA), Bulut said the theme of her art is based on human rights, the education of refugee children and their empowerment. After studying architecture, she began creating art projects at her shop in Istanbul with the help of a young team that worked with her for over seven years in her architecture company.

According to Bulut, she spends most of her time on Istanbul's historical peninsula for inspiration. "Here, I am inspired by textures, buildings, people and materials. I analyze them and create data related to them. We established an open lab system here and we started to work on art and design products through this system," she said.

She said that while working on her art projects, her focal point remains on retaining the spirit of the material and finding ways to transform it. "For example, wood wants to be spiral, water wants to flow and stone wants to be steady. I work on these materials and their identity in accordance with their chemistry and how we could reflect these onto projects," she explained.

Bulut said she also researches stories of children taken away from their families by terrorist groups. She thinks about the ordeal that their mothers must endure and of ways to reintegrate the children into society when they are rescued.

Speaking more on this subject, Bulut stated that these wounds are present in modern-day Turkey and that she is trying to help heal these wounds through her art. "I concentrate on how we could aestheticize them through science and art, how we would create a groundwork from the very beginning and turn all wounds into power," she said.

For instance, in her exhibition themed around the "postmodern" coup of Feb. 28, 1997, in which the military forced the government to resign, she magnified an actual wound 200 times to represent the healing process. "People come and go while you remain stationary. We experience this in everything. We experienced it during the Feb. 28 (events), and we are also experiencing many social traumas. A wound is not a negative experience. In our path, a wound is an experience that develops and makes us grow," she said.

Bulut's latest art installation at the office of Directorate General of Migration Management in Istanbul is called the “murmuration,” which is part of her trilogy of symbols. She said she wanted to explain the phenomenon of migration through representations of heaven, hell and purgatory from Italian poet Dante Alighieri's "Divine Comedy."

"My work at the migration management office symbolizes purgatory,” she explained. “The hell point of the trilogy is a solution I've been working on with refugees on the Syrian border, and heaven is going to be in a location in Europe dedicated to human rights and will represent the heartbeat of a child," she said.

Bulut stressed that the migration office in Istanbul, which is in the middle of the city in the Fatih district, has been a critical location for the nearly 5 million immigrants who live in Istanbul.