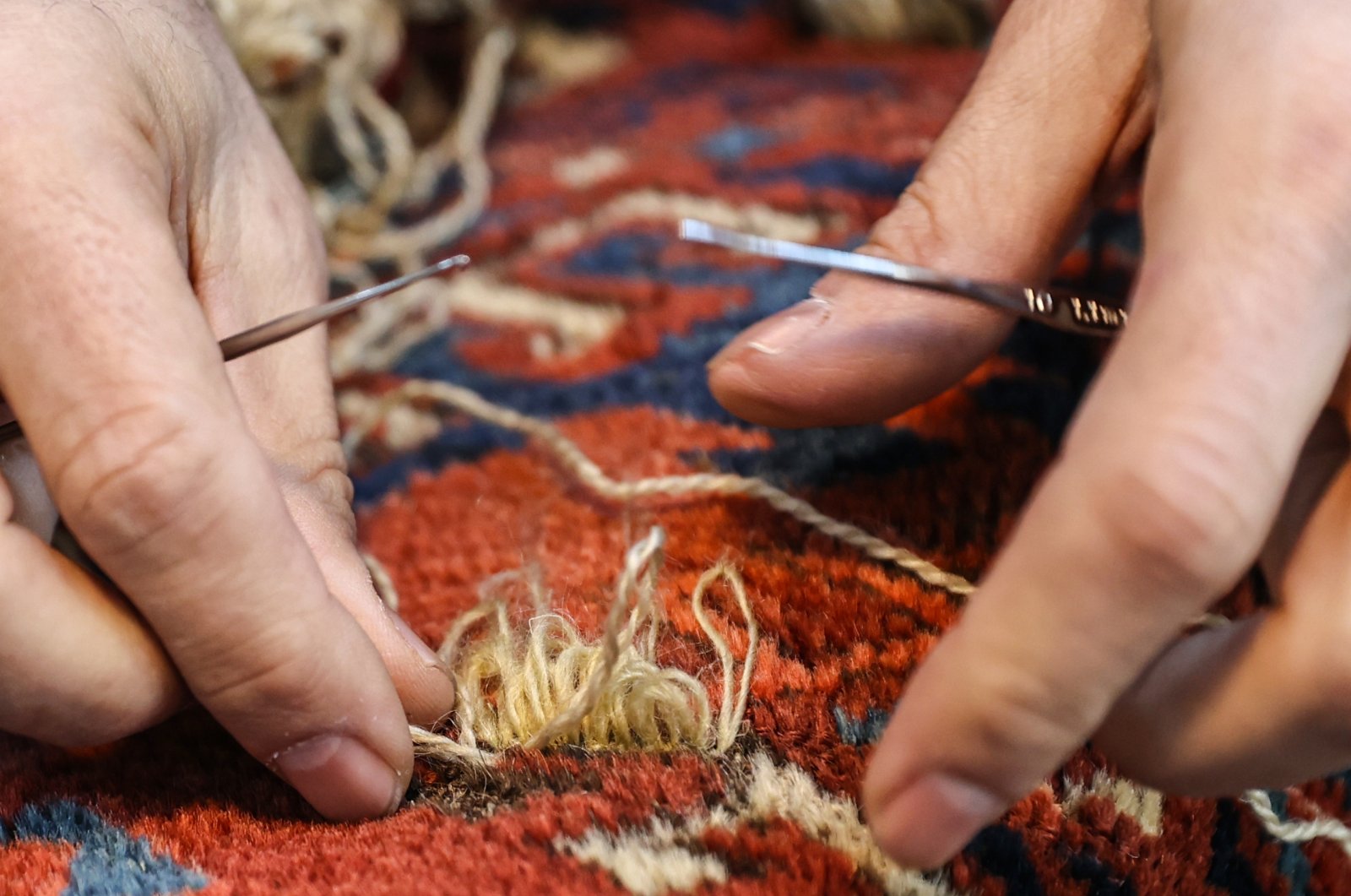 A close-up of Ramazan Yumuşak's hands while repairing a carpet at his workshop in the Babıali Carpetmakers Bazaar, Istanbul, Turkey, Jan. 10, 2021. (AA Photo)
by DAILY SABAH WITH AA Jan 14, 2021 9:58 am
RECOMMENDED

Traditional handmade Turkish carpets, with their antiquity, prestige and cultural importance, still dazzle customers all over the world. These unique, valuable carpets and rugs have been in production for centuries, and there has always been a need for special repairs for these rich textiles. Ramazan Yumuşak, an Istanbul-based carpetmaker, has been providing traditional carpet repair services using a special technique in Istanbul's Babıali Carpetmakers Bazaar since 1985.

Antique carpets are valuable and enchanting but require preservation. In time, traditional carpets and rugs that decorate the floors of Turkish homes and businesses require repairs as their dye wears off and gradually deteriorate. When such services are needed, master Yumuşak skillfully repairs the damage with a unique method: repairing carpets with carpets. The technique involves carefully mending and patching antique rugs and carpets with similarly colored and textured carpets to preserve the value and finesse of the antique items.

Yumuşak is one of the few remaining experts in this line of carpet repair. He learned his craft from his grandfather, who worked in the Babıali Carpetmakers Bazaar under other masters. Yumuşak is trying to cherish and keep the family tradition alive, along with his brother who performs the same craft in Japan.

Yumuşak explained how the family acquired such a tradition. “My grandfather was one of the only two Turks who were experts in this craft during his time. By the time it became clear that my brothers intended to study abroad, my father advised me to drop out of school and learn this trade. Others would come, learn and straightaway would leave, so they needed people who would stay. So, I left school, aged 11, and started learning to repair carpets. To this day, I am still working with this craft,” he told Anadolu Agency (AA).

Yumuşak said he feels as passionately about the craft now as when he first started and that he wants to keep alive this little-known profession and culture.

Yumuşak pointed out that the process involves intensive labor and long hours and that every single carpet required months of diligence and hard work. “We spend two or three months of effort on every single carpet. They become our beds almost,” he joked. “Once we find the old carpets, we dismantle them, shampoo, wash, soften and iron them carefully. Then we use them to repair other carpets with matching textures.”

The master noted that people from around the globe are interested in antique carpet repairs, and demand from Europe is particularly high. A high number of antique collectors from Germany, France and Italy regularly acquire Yumuşak's services for repairing antique carpets.

Yumuşak emphasized that carpets and rugs are one of the finest riches of Turkish culture and spoke about the history of these traditions. “Turkish traditions of carpetmaking go back to the Central Asian days of the Turkish culture. It was more common, particularly among Turkmen and Azerbaijani Turks of the Oghuz tribe, as rugs and carpets were an essential part of their daily nomadic lives spent mostly in highlands,” he said. Carpets and rugs had a variety of purposes for nomadic Turks and remained important products even centuries later, used as decorations for walls, as prayer rugs or even as sheaths for weapons, he explained.

Yumuşak also noted that the style of carpets evolved over time, and one of the most significant developments in historical carpet manufacturing occurred during the Ottoman Empire. “During the Ottoman period, special carpets and rugs began to be woven specifically for palaces, particularly in the western Uşak region,” he said.

“In 1843, Sultan Abdülmecid founded Hereke Fabrika-i Hümayun (Imperial Factory), and the manufacturing of special Hereke carpets started there. Then, in the late 19th century, designer and weaver Master Zarek started weaving the famous silk Kumkapı rugs, and those are still some of the rarest and most valuable carpets in the world today," Yumuşak said.