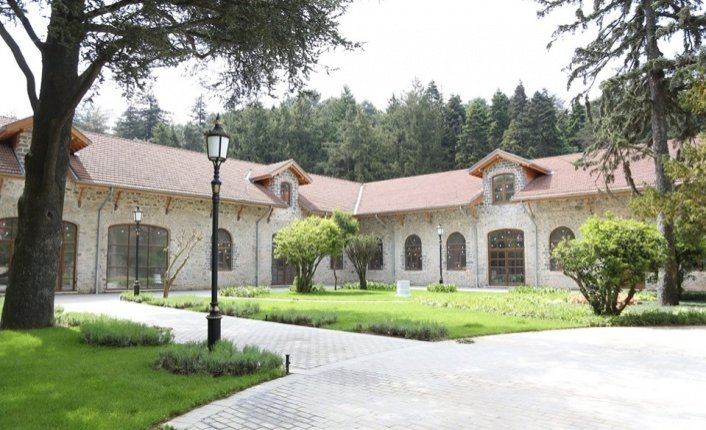 An outside view of the Beykoz Crystal and Glass Museum in Istanbul, Turkey. (Archive Photo)
by DAILY SABAH Apr 09, 2021 4:24 pm
RECOMMENDED

On Friday, President Recep Tayyip Erdoğan opened the Beykoz Crystal and Glass Museum in Istanbul’s Beykoz district, a location that is introducing Turkish glass art to the world. The museum which was organized by the National Palaces under the Turkish Presidency, features historical artifacts, objects and products that tell the story of the art of glass from the Seljuks to the present.

Speaking at the opening ceremony, President Erdoğan said that they, as the Turkish Presidency, are pleased to have brought the Beykoz Crystal and Glass Museum to Turkey. Noting that the area featuring the museum building was an art oasis in the past, Erdoğan said: “The remaining barn building of this area has been restored by the National Palaces in the present day and turned into a museum. I wish we could keep this building alive with all the works it had when it was built. Unfortunately, in our country, the ancestral heritage was treated very roughly for a period, and many beautiful works were destroyed. Especially during the single-party period, we were the prisoner of a mentality that is imitative, oppressive and at odds with the values of the country and the nation. But very important artistic works have been produced and protective activities have been carried out in recent years.”

The Beykoz Crystal and Glass Museum is located in the historical Abraham Pasha Mansion, which was built by Ottoman civil servant Abraham Pasha in Beykoz Grove and has a covered area of 1,400 square meters (around 15,070 square feet). Restored three years ago, the mansion-turned-museum contains works mostly registered in the inventory of the National Palaces.,

The museum will be open to visitors with its 13 thematic exhibition halls. Artifacts from Seljuk and Ottoman palaces are presented to visitors on a journey that starts with the raw material of glass. The largest area in the museum is reserved for Beykoz glasses. A video explaining the production of the art of glass processing called çeşm-i bülbül (nightingale's eye) is also available to view at the museum. In addition, there are pipes, scissors, molds and various glass-making tools on display.

Along with the exhibition halls, a library on glass art was also established in the museum. The library, which includes 600 works in Turkish and foreign languages, is a reference source for those who are interested in glass art and researchers. The Beykoz Crystal and Glass Museum is equivalent to its counterparts in Europe with its temporary exhibition area, educational workshop for children, a cafe offering exclusive fare and a souvenir shop where glassworks are offered for sale. The museum can be visited between 9 a.m. and 6 p.m. on weekdays within the framework of the measures taken against COVID-19.