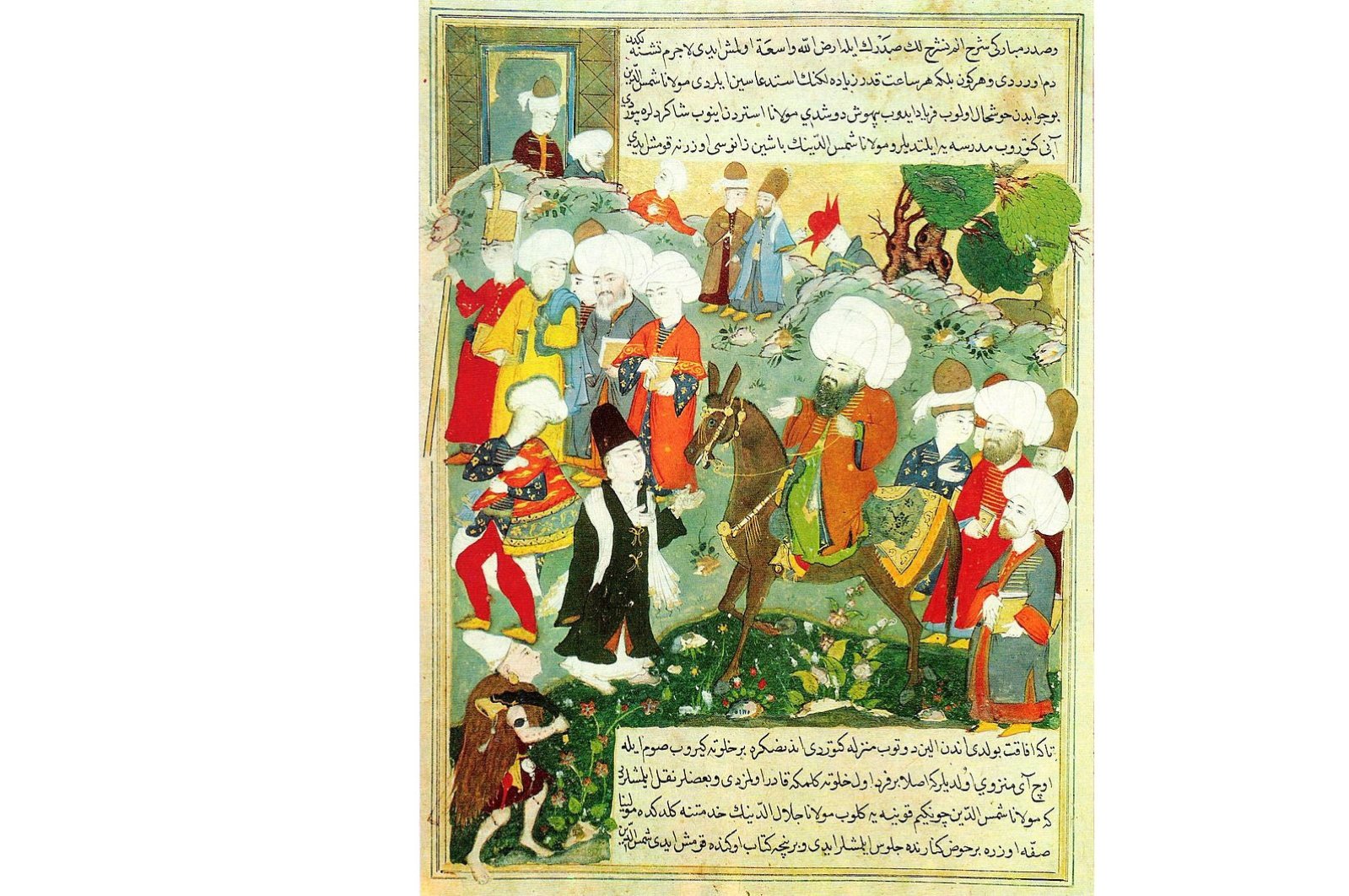 An Ottoman-era miniature depicts Mevlana Jalaluddin Rumi on horseback and Persian poet Shams-e Tabrizi in front of him.
by ALİ TÜFEKÇİ Oct 28, 2020 10:41 am

In Islamic culture, sharhs and hashiyas helped texts spread over larger geographies and ensured they were handed down to the next generations. Learn the most significant texts used these explanatory comments

Widely read books act as a mirror reflecting the worldview, lifestyle and accumulated knowledge of people and communities. What everybody may not know is that before the advent of modern publishing, many books were written and copied manually, with some remaining popular works today.

In Islamic culture and civilization, the way texts were preserved for future generations was through the traditions of text, sharh (scholia) and hashiya (footnote). Texts were simple books teaching science, and the first books students would read and memorize in each particular field. Texts provided a general understanding of the topic and did not include different opinions on the matter. Sharh means split, open or separate in Arabic, an appropriate title for a book meant to accompany often dense texts, providing further explanation for the text's ambiguous statements. Hashiya, today's footnotes, helped further clarify certain subjects below the sharhs and provided much more detailed information.

If these explanatory pieces were considered insufficient or new information was found, new sharhs and hashiyas on the same texts were written. Thus books triggered the writing of more books, increasing work numbers. This is why a piece of work from an Islamic civilization written three to four centuries ago is still available to read today even if the original text has been lost. And these works are still waiting to be discovered.

In the conference organized by the University of California in 2012 under the name of "The Hashiya and Islamic Intellectual History," the tradition of sharh-hashiya was discussed. It was stated in the conference that the number of works produced in the world within the Islamic civilization and passed onto the present day is around 10 million. The researchers stated that only 10% of them had been studied.

One of the comprehensive studies on this subject belongs to Khaled El-Rouayheb, a professor of Arabic and Islamic intellectual history at Harvard University. Breaking many prejudices in his book titled “Islamic Intellectual History in the Seventeenth Century: Scholarly Currents in the Ottoman Empire and the Maghreb,” the professor proves the existence of an intense scientific environment which brought about many written books in the Ottoman geography.

Among these thousands of books in Islamic culture and civilization, some exceed geographies and centuries. When we look at them, we see that most of them are intertwined with Sufism.

‘The Alchemy of Happiness’

Sufi works mostly spread through the religious orders with which their authors were affiliated. One of the most important activities in lodges, the gathering places of these religious orders, was Sufi talks which were accompanied by a book. Also, the dervishes in lodges were always reading and studying certain books. In fact, prominent Sufi works are those that feed people not only spiritually but also materially.

An example of such works are books by Persian philosopher Abu Hamid Mohammed Al-Ghazali, who was born in 1058 in Tus district of the Khorasan region in Iran. Al-Ghazali’s works were spread and read so much that the scientific circles started to call him "Huccetülislam,” meaning the proof of Islam.

Many of his books have not survived to date due to the Mongol invasion of West Asia. However, many researchers tried to prepare a list of Al-Ghazali’s works. French orientalist Maurice Bouygues identified about 404 among them.

One of Al-Ghazali’s books that has been continuously read for a thousand years is “Ihya'u Ulum'id-Din” (“The Revival of the Religious Sciences”). The four-volume book is among the favorite works in the Islamic world today.

Al-Ghazali prepared a Persian summary of “Ihya'u Ulmu'id-Din” to introduce it to more people. “Kimya-i Saadet” (“The Alchemy of Happiness”) was also translated into many foreign languages. Since it is a one-volume work, it has been widely read.

These works of Al-Ghazali took place in the libraries of all Muslim geographies, including Africa, India, the Caucasus and Arab countries. Studies and research have been conducted on them numerous times, and many religious and moral works make attributions to them. They continue to receive similar attention today.

Another famous book belongs to Sufi philosopher Mevlana Jalaluddin Rumi, who was born two centuries after Al-Ghazali. His six-volume “Masnavi” takes its name from a kind of poem written in rhyming couplets. This work, unlike Al-Ghazali’s books, was written in the form of poetry. The book, about which many studies have been conducted, is among the essential works on Ottoman geography.

Although its language is Persian, it became so famous in Anatolia that it was read on Ramadan nights and on special occasions. It was translated into Turkish by different translators, and most of these translations are in the form of a poem. Classical Turkish poetry was also shaped under the shadow of this work.

Originally from the Naqshbandi order, Indian Sufi Shah Ghulam Ali Dehlavi was reading and listening to “Masnavi.” Even his saying on this work was famous: "The most virtuous book after the Quran and hadiths is ‘Masnavi’ of (Mevlana) Jalaluddin Rumi."

While the book of a Sufi who lived in Anatolia attracted interest in India, the book of an Indian Sufi also drew attention in Anatolia. It was “Mektubat” (“Maktubat”) by 16th century Sufi Ahmad al-Faruqi al-Sirhindi, also known as Imam Rabbani.

This work comprised of the letters by Imam Rabbani, who was described as a mujaddid – meaning a reviver – for his work in rejuvenating Islam in the second millennium of the Islamic calendar, consists of three volumes.

The impressive letters he sent to his students were both literary and intellectual masterpieces. All these letters he wrote in Persian were collected in a book and spread rapidly in Islamic intellectual circles. One of the characteristics of these letters, which were read throughout five centuries after his death, is that they popularized the letter culture.

One of the Sunni Islamic scholars in Anatolia, Abdulhakim Arvasi, once said that Imam Rabbani’s “Maktubat” is unique in stating particulars of Sufism and Islamic judgments while accepting Shah Ghulam Ali Dehlavi’s evaluating Rumi’s “Masnavi” as the most virtuous work.

The scholars of the time called Imam Rabbani “Sıla” (meaning combiner) because of his services. According to him, material and spiritual, Islamic law and Sufism, heart and mind should work together like the two wings of a bird.