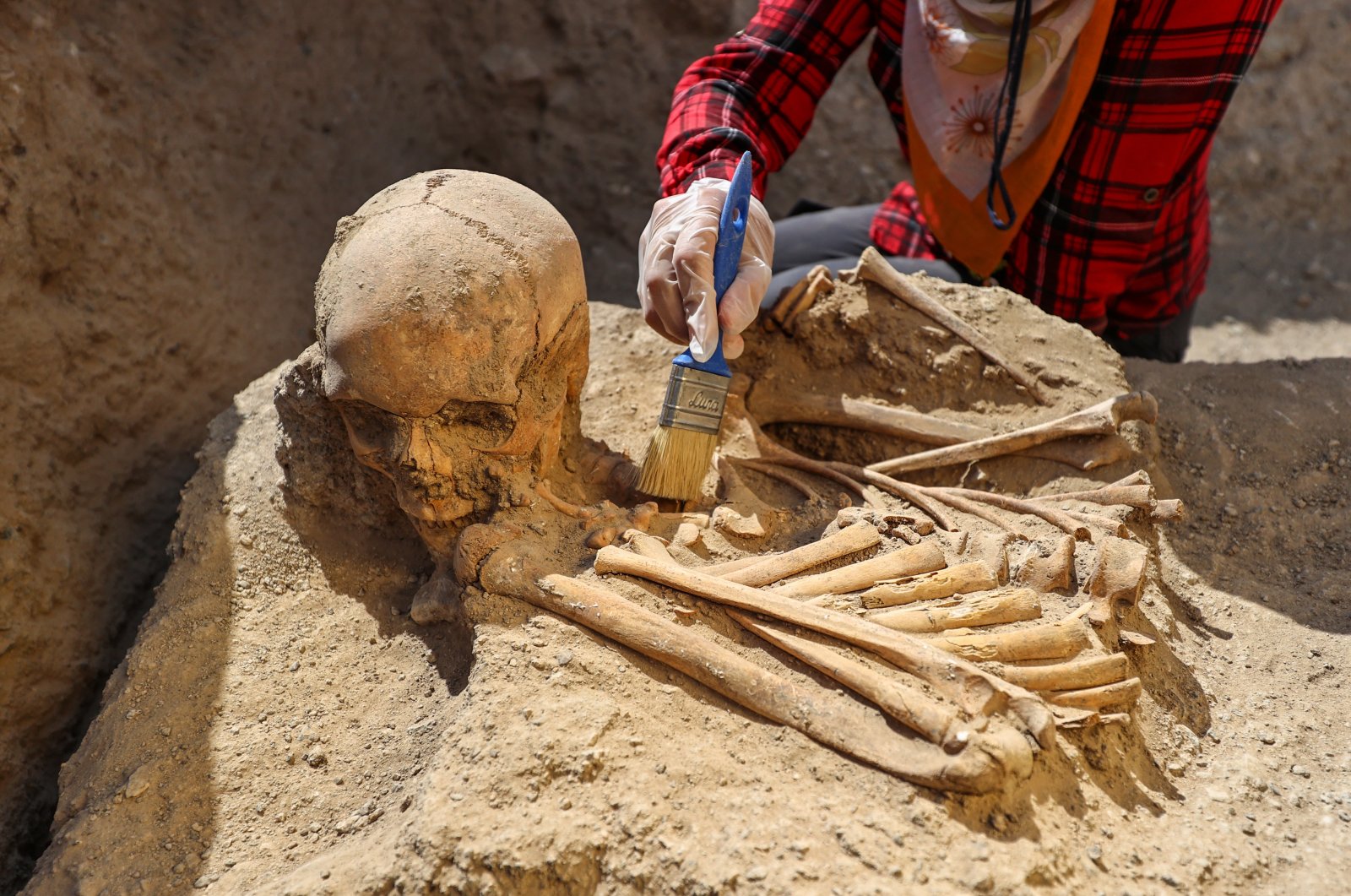 A close-up of an archaeologist's hand while working on one of the newly found graves around Çavuştepe Castle, Van, eastern Turkey, Sept. 19, 2021. (AA Photo)
by Anadolu Agency Sep 20, 2021 3:15 pm
RECOMMENDED

Two graves belonging to the Urartian period were unearthed in a necropolis during excavations that started five years ago in Çavuştepe Castle in eastern Turkey’s Van province. The graves reveal a new burial type in the region.

Archaeological digs continue at Çavuştepe Castle, commissioned by Urartian King Sarduri II in 750 B.C., and the necropolis around the castle under the presidency of professor Rafet Çavuşoğlu of the Van Yüzüncü Yıl University's (YYÜ) Faculty of Letters Archaeology Department.

The two newly unearthed graves in these areas provide information about the burial traditions and lifestyles of Urartians. While one of them belongs to an adult, the other is a grave of a child.

In the tombs examined by archaeologists, it was determined that the valuable grave goods of the deceased were not in place and their bones were in a different area.

Excavation head professor Rafet Çavuşoğlu told Anadolu Agency (AA) that they are mostly working on conservation and protection in the area.

Noting that they have been excavating in the necropolis area of the castle since 2017, the professor stated that they have reached very important archaeological data in terms of Urartian archeology and burial traditions here.

Emphasizing that the latest graves gave them new information about the burial customs of the Urartians, Çavuşoğlu said, "Previously, there were cist graves, chamber tombs, normal graves that are buried in the ground, and urn tombs in the necropolis area. We have encountered a new type of tomb now. In this type, the dead bodies are buried near a platform.”

“We usually found the belongings of individuals in the graves in this site. However, the latest adult grave did not have anything with it and his/her corpse was found in a mixed state. For example, we found the head of the corpse next to the feet. This indicates that it was destroyed. We think that the tomb was opened by someone to take the jewelry.”

Çavuşoğlu said that the next work on the site will provide much clear information.

Urartu civilization was an Iron Age kingdom located near Lake Van and the mountainous plateau between Anatolia, Mesopotamia, the Iranian Plateau, and the Caucasus Mountains. The civilization, also known as the Kingdom of Van, was established around the mid-ninth century B.C. and enjoyed considerable political power in the Middle East.

The Çavuştepe Castle, situated in Gürpınar district of Van, belongs to the very bright and successfully wealthy period of Urartu civilization. It was comprised of two sections: the upper and lower parts The upper castle once housed a temple to Khaldi, the Urartian storm god and supreme deity. The lower castle includes a variety of buildings.