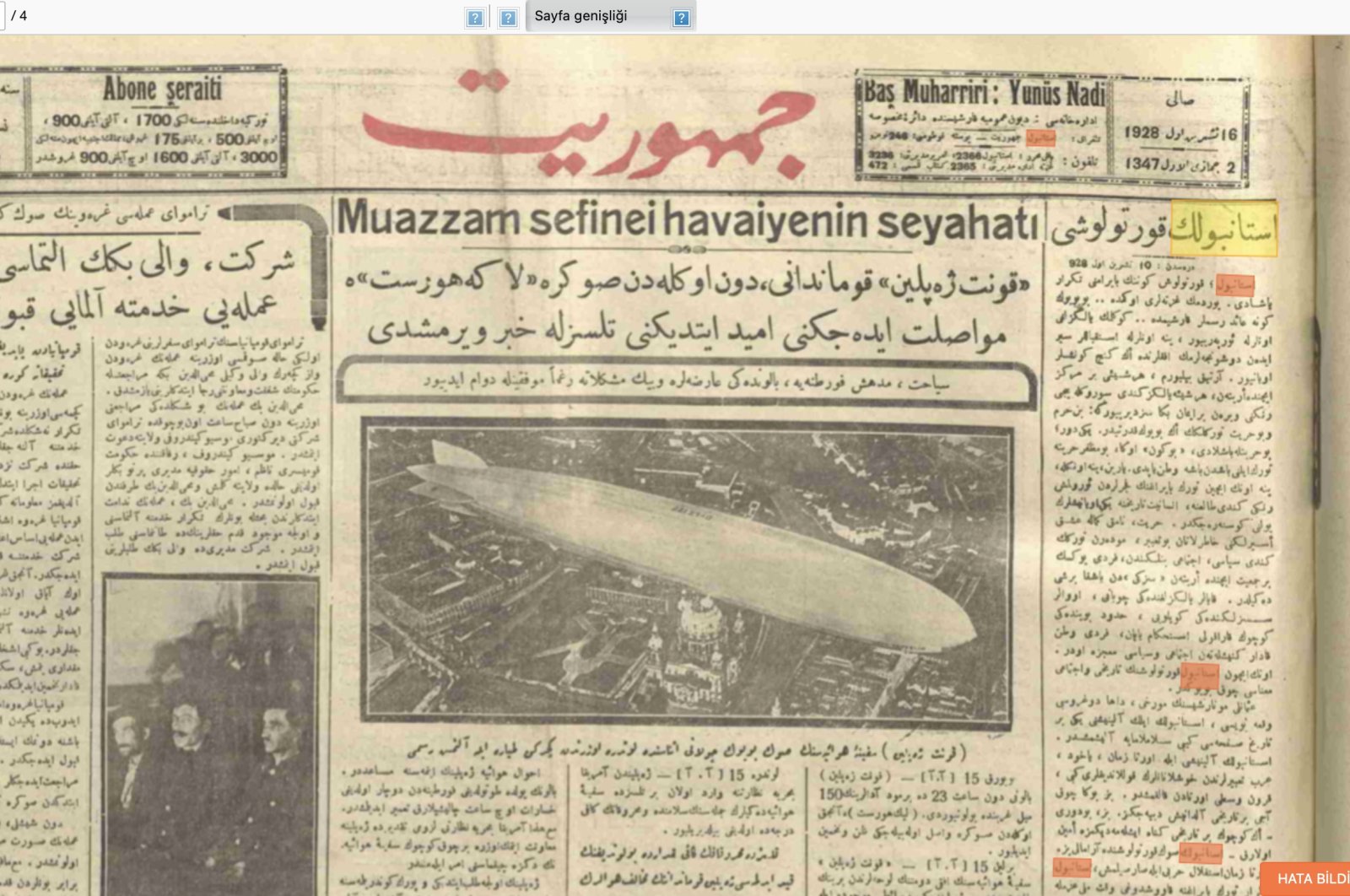 A screenshot from the website “WikiLala” shows the front page of the Ottoman newspaper Cumhuriyet's Oct. 15, 1928 issue, with the keyword “Istanbul” highlighted, obtained on April 22, 2021.
by Daily Sabah with IHA Apr 23, 2021 10:46 am
RECOMMENDED

The online digital library project, “WikiLala,” which brings together and aims to digitize all the printed texts from the Ottoman Empire since the introduction of the printing press, has recently launched a full version of its website which had been in beta for a while. Since its launch, the website has attracted more than 200,000 visitors from 107 countries.

The digital library sheds new light on the empire's history and culture. Thousands of books, magazines, journals, newspapers and various other manuscripts and documents have been digitized from Ottoman Turkish works.

If the source material is a physical copy, the team scans the document and digitizes the result, while original digital copies are also accepted and inducted. The digitized works are then cataloged and uploaded to the website's library.

The website with the digitized works also acts as a search engine, allowing researchers and enthusiasts to search and access any information they are looking for by entering a word or phrase in either Latin or Arabic letters.

Project manager Sadi Özgür stated that it was a fairly young idea, the concept of the project emerging in 2019, and explained their work. "It is possible to search printed texts in the Ottoman period using Latin letters. At the same time, you can search with the Ottoman alphabet, as well,” he said.

“Any and all open access works (in terms of copyright), can be included in the system. Here, users can also contribute by uploading their Ottoman archives to the system,” Özgür told Ihlas News Agency (IHA).

Özgür noted that there was a significant amount of international interest in the project. “In two months, there have been more than 200,000 entries to the digital library from nearly 107 countries. Often they are from Turkey, with the United States in second place and Germany coming in third,” Özgür said.

Project consultant Harun Tuncer, on the other hand, emphasized how the project contributed to and helped academic research. "When academics searched the literature about an issue they were working on, they could search only through the title of the book or the article. With this project, they can search inside every Ottoman article and book in Latin letters," Tuncer said.

Tuncer said that the project was now open to 78 universities and various municipalities along with the Presidential National Library free of charge.

Tuncer also expressed gratitude to the Ministry of Culture and Tourism who had recently bestowed an innovative initiative of the year award to the project.

“Since our project has just started, this award has made us both happy and encouraged.”