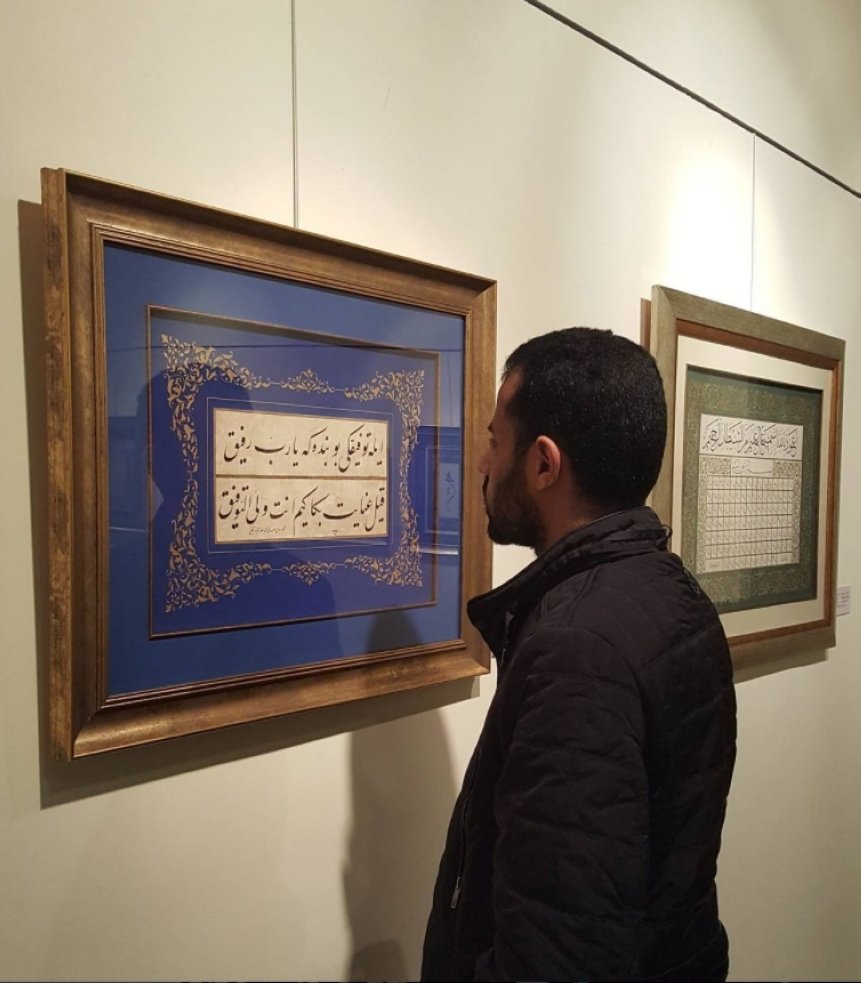 Yemeni artist Zaki al-Hashimi came to Istanbul some 10 years ago and has been sustaining the art of calligraphy in the metropolis, producing fascinating works and providing tutorials for enthusiasts. The talented calligrapher has recently been working on a project to handwrite a copy of the Quran in the Arabic-language Naskh script.

"I have been working on this project for a while and I may finish it in a year from now," al-Hashimi, 39, told Anadolu Agency (AA) on Thursday.

For al-Hashimi, Arabic calligraphy is one of the Islamic arts that carries a distinct trait.

"Arabic calligraphy gained its sacredness from the sacred texts it represents, so it received a different attention compared to other Islamic arts," he said.

Arabic calligraphy is the artistic practice of handwriting based on the Arabic alphabet. It is known in Arabic as “khatt,” derived from the word "line," in which Kufic is the oldest form of the Arabic script.

Al-Hashimi sees Arabic calligraphy as a "relief" that he runs to when life puts its burdens on him.

"I return to calligraphy and its texts that contain great messages and guidance. We enjoy the remarkable values it represents," he said.

The Yemeni calligrapher won four international prizes, including two awards from the Research Center for Islamic History, Art and Culture (IRCICA, Istanbul), a subsidiary organ of the Organisation of Islamic Cooperation (OIC).

Al-Hashimi came from Yemen to Istanbul 10 years ago, where he started learning Arabic calligraphy more systematically.

In Istanbul, he got the chance to meet many well-known calligraphers and learn from their rich experiences.

"Now, I work in Istanbul as a teacher of Arabic calligraphy teaching many students of different nationalities," he said. "I also work as an expert and technical adviser in some official and private institutions."

Al-Hashimi said Turkey has been a magnet to well-known artists due to its rich history of art.

"This gathering of artists in one place generated a great motivation to create a wide and diverse artistic legacy in Turkey," he said.

"My work got a wide recognition in Turkey, especially the distinguished painting I presented to Turkish President Recep Tayyip Erdoğan in 2017, which was a calligraphy of Surat Al-Rahman in Naskh and Thuluth scripts," he noted.

The two scripts are among the popular fonts used for Arabic calligraphy.

Naskh originated from the holy cities of Mecca and Medina, but Thuluth was used during medieval times and is known as one of the oldest scripts to exist. The script was used in mosques and for Quranic texts due to its beautiful appearance.

"I like all types of scripts, but due to my limited time, I only practice some of them, such as Naskh, Thuluth, Muhaqqaq, Ruq'ah and Rayhan," he said.

Al-Hashimi published a book about the Naskh script and its structure, in addition to a series of educational books for teaching Arabic calligraphy for non-Arabic speakers.

He believes that Arabic calligraphy is "not a luxury, but rather a necessary art to preserve the Islamic heritage."

Islamic art covers a range of artistic fields, including architecture, calligraphy, painting, glass, ceramics and textiles, among others.