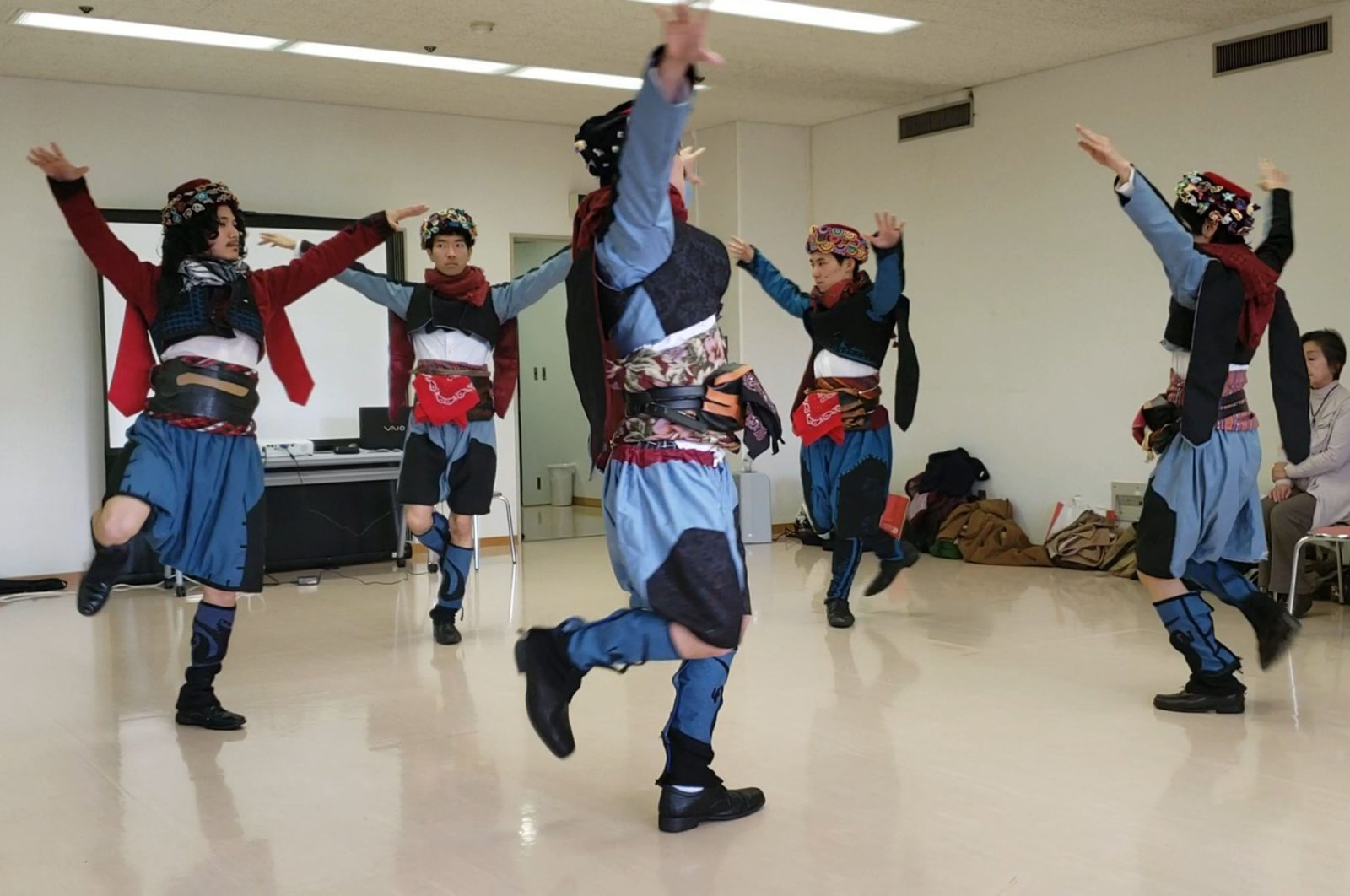 Still shot from the video of Takasaki Taito and his friends performing the Zeybek dance. (AA Photo)
by Anadolu Agency
Mar 20, 2020 10:21 am
Twenty-five-year-old Japanese Takasaki Taito attended folk dance courses organized by the Metropolitan Municipality in western Turkey's Denizli province and learned how to perform Zeybek, a folk dance peculiar to Turkey's Aegean region. Now, Takasaki has introduced the dance form to his country.
According to a statement from the municipality, Takasaki, a medical student, came from the Japanese city of Kyoto and went to various parts of Turkey to learn folk dances. He applied to the Metropolitan Municipality’s Folk Dance Ensemble to learn the folk dances of the Aegean region in Denizli, where he came last year. He took a one-week-long course here. The Japanese student learned regional variations of the Zeybek dance, including the Tavas, İbrahim Usta, Gireniz Ören and Kütahya types.
Returning to Japan, Takasaki taught Zeybek to his friends in his hometown who were interested in Turkish culture. He and his friends dressed in the local Efe costumes associated with the Zeybek dance and performed it. They sent a video of their show to the Denizli Metropolitan Municipality’s Folk Dance Ensemble.

Denizli Metropolitan Municipality’s Folk Dances coach Mehmet İzmirlioğlu stated that they are happy with the promotion of Turkish culture in Japan. Indicating that the surprise video that was sent to them recently made the viewers proud, İzmirlioğlu said: “Last week, Taito sent me a video. Taito and his friends performed Zeybek beautifully. The introduction of Efe culture in Japan has made us proud. We have been rewarded for our efforts. It is very valuable for us to have someone who is in love with Turkish culture to come and learn these dances from us and then promote them in his country.”
Story of Zeybek
When talking about the Aegean region, the Efe (Zeybek), who were known for their bravery and fight against injustice, come to the mind. Who were they? The Efe were the leaders of the irregular Turkish - Greek bandits in the Aegean region. First appearing in the 16th century, these leaders and their teams were distinctive in their attire. For example, they wore shorter trousers and carried yataghan, a type of Ottoman knife. Inspired by the Efe, the type of folk dance in the Aegean region is called Zeybek. The performers of the dance wear Efe costumes, and their moves represent the courage of the Efe.
Last Update: Mar 20, 2020 7:26 pm