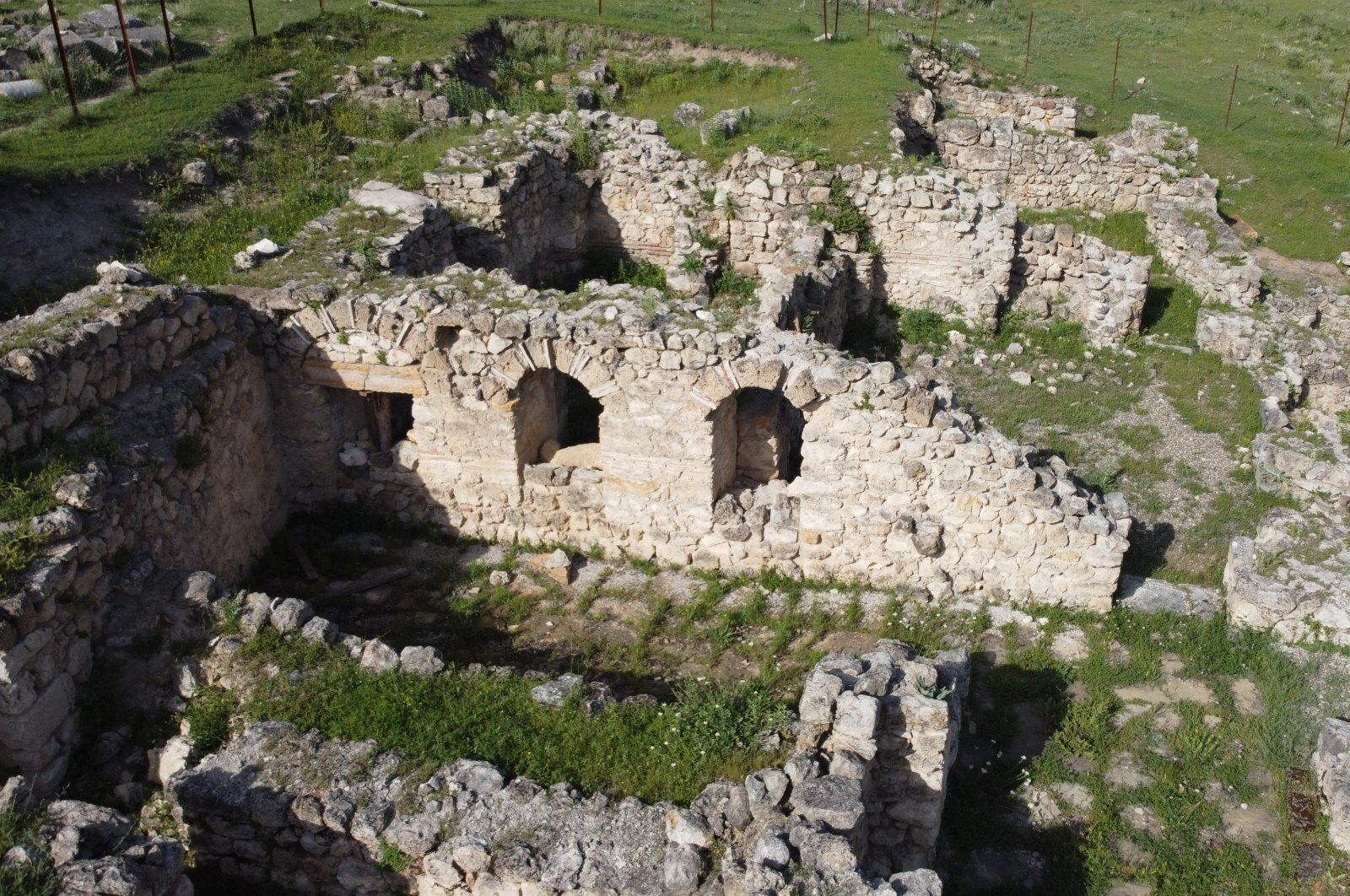 A Roman structure under a church has proven that the history of the ancient city of Hadrianopolis dates back to the Late Chalcolithic period, far earlier than previously thought

With ongoing excavations over the last five years in the ancient city of Hadrianopolis in the Eskipazar district of Turkey’s northern Karabük province, it has been revealed that the history of the ancient city dates back 5,500 years, much earlier than previously thought.

Excavations conducted to reveal the history buried under the ancient city, known as “Zeugma of the Black Sea,” started in 2003 and have been carried out under the leadership of Kastamonu Museum and through the coordination and guidance of Ersin Çelikbaş, an academician at Karabük University’s Archaeology Department. Mosaics depicting animals such as horses, bulls, elephants, panthers, deer and peacocks have been unearthed in the ancient city, which covers an area of 12 square kilometers (4.6 square miles). Skeletons in a rock tomb at the site, ancient coins, bone hairpins, a unguentarium (tear bottle) and a tomb from the second century are among the other finds. Researchers have also discovered that the ancient city was home to at least 14 other structures, including two baths, two churches, one defense structure, rock tombs, one theater, one arched and domed structure, one monumental cult niche, fortifications, villas, other monumental buildings and some other cult areas.

An early Roman building was discovered under the structure named "Church C" in the ancient city, an area where excavations began in 2017 and are still ongoing. After uncovering the other structure under "Church C," archaeologists were able to determine that the foundation of Hadrianopolis dates even further back than the previous estimate of the first century B.C.

In an interview with Ihlas News Agency (IHA), Çelikbaş stated that the work they carry out in Hadrianopolis is long-term and that long-term excavations will introduce scientific and touristic benefits. Çelikbaş noted: “While the Hadrianopolis excavation team continues scientific excavations, the excavated areas will open for visitors. We plan to continue excavations as long as the weather conditions are in our favor. We have started to reap the fruits of the Hadrianopolis excavation. We have unearthed very important scientific findings. Studies have been going on in this ancient city for 17 years, and previous teams had already collected crucial information about the site. Our research on different areas has enabled us to collect new information to add to that of the previous teams. The publications so far said that the first founding phase of Hadrianopolis was 2,100 years ago, dating back to the first century B.C., corresponding to the Late Hellenistic period. This year's excavations have shown us that settlement in the city began in the Late Chalcolithic period, which points to about 5,500 years ago. We added 3,500 years of history to Hadrianopolis.”

Explaining that they can support the claim with concrete evidence, the excavation head said the team has found offering pits and ceramics believed to belong to the Late Chalcolithic period in the area called the Southern Necropolis.

Hadrianopolis' geographical location also played an important role in the city's past, Çelikbaş said. “It is located in a valley on very fertile land. The buildings in Hadrianopolis are located on terraced flat areas. Therefore, from the earliest period until the end of the eighth century B.C., Hadrianopolis was home to continuous settlements. These settlements were not built on new points but continued on existing terraced areas. 'Church C' was built on the site of a structure once belonging to a period that we would call the 'early Roman' period. We found this in our excavations this year. When we consider the geopolitical location, geography, climate and vegetation of Hadrianopolis, we see how important a city it was. Hadrianopolis was an important center not only in late antiquity but also in its early periods. From a second century B.C. inscription from Hadrianopolis, we were able to decipher that it was the most important market area of the region. It was also a very important religious place for the Christian world. Hadrianopolis was revered in antiquity as an important pilgrimage center. During past excavations and those we conducted this year, we have gathered important data belonging to the Christian period. We will continue to study the area,” Çelikbaş added.

Underlining that the work in Hadrianopolis attracts the attention of not only Anatolia but also the whole world, Çelikbaş continued: “An important person for the Christian world named Alypius the Stylite, who was a seventh-century ascetic saint, lived here. Ancient sources about him state that girls and boys’ monasteries were attributed to him, and ancient sources mention that he died here. If we get concrete data on this saint, we are sure that it will be very impressive and attractive.”

Pointing out that one of the most important areas in Hadrianopolis is the Southern Necropolis, which consisted of rock tombs, Çelikbaş said: “Our studies here have revealed that the necropolis was used intensely in the second century A.D., then in the fourth century and finally in the sixth century. Bodies were buried in the graves of earlier periods in this necropolis, which point to the city being heavily populated. When we look at the data on the population of Hadrianopolis, we estimate that it exceeded 50,000 at some point. In terms of the settlement, we are talking about a city with a very large territory, which dominated an area of ​​approximately 12 kilometers (around 7 miles). During our discussions with our team, we need to look at the burial traditions in Hadrianopolis. If we start excavations in the necropolis, we expect to uncover information about the population and fate of Hadrianopolis. So we have started to work in this direction. At this point, our efforts to find the grave of Alypius the Stylite are ongoing, and we believe we will be able to collect concrete data about the saint through this research.”

Remarking that they utilized ground-penetrating radar (GPR) in the area in 2013, Çelikbaş said: “The sections that have been excavated over the past 17 years don't even cover 5% of Hadrianopolis. It is impossible to know how many hundred years it will take for Hadrianopolis to be fully excavated. Archaeological excavations are long-term studies that require patience and time. An archaeologist needs to conduct his excavation patiently. We need to protect the architectural structures that we have uncovered and put them in the service of the people as well. Hadrianopolis is a mosaic city. Therefore, the density of mosaic structures in an ancient city also requires the urgent implementation of conservation projects. It is possible to find mosaics in almost every structure. The splendor of the mosaics continues to impress people. However, they are very delicate and need to be protected after they are discovered.”