Protesters march on in Thailand 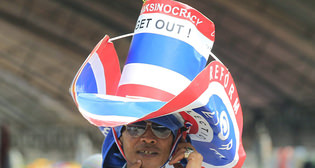 Anti-government protesters march to the headquarters of the ruling party

Bangkok (Reuters) A few hundred Thai anti-government protesters marched on the headquarters of the ruling party on Wednesday, while rice farmers remained camped in another part of the capital demanding money owed by the state.

The political movement aimed at overthrowing Prime Minister Yingluck Shinawatra is in its fifth month, but leader Suthep Thaugsuban closed several big protest sites at the weekend as his number of supporters dwindled.

The government is also grappling with action by farmers, normally its staunchest supporters, in protest at a rice subsidy scheme that has gone badly wrong, leaving hundreds of thousands of them unpaid and causing huge losses to the budget.

On Wednesday the state bank managing the scheme said it expected to start paying some arrears next week but the sum announced failed to impress farmers who have been demonstrating at the Commerce Ministry for weeks.

"That 30 billion baht is very small compared to the total 130 billion baht the government should have paid us since October," said Kittisak Waraha, one of the farmers' leaders, referring to a sum cited by officials earlier this year.

Suthep's anti-government protesters have largely kept to Lumpini Park in central Bangkok since the weekend.

But about 300 members of an allied student-led group went to the headquarters of Yingluck's Puea Thai Party on Wednesday, having latched on to vague separatist talk by some of her supporters, including a suggestion the government could move from Bangkok to her northern stronghold of Chiang Mai.

They attached a banner to the building saying "Stop the campaign to split Thailand" but left soon afterwards and therewas no confrontation.

They moved on briefly to the excise department as part of a campaign to stop ministries and state agencies from functioning, which Suthep said would be stepped up even though his supporters ended a blockade of main roads from the weekend.

The government imposed a 60-day state of emergency on Jan. 21 to contain the latest unrest in an eight-year conflict that broadly pits Bangkok's middle class, the royalist establishment and southern Thais against the mostly rural supporters of Yingluck and her brother, former premier Thaksin Shinawatra.

On Tuesday it said the emergency could be extended until the protests ended completely and there was no more violence. However, the focus is moving away from the streets and towards judicial efforts to remove Yingluck, including a charge of dereliction of duty brought against her by the National Anti-Corruption Commission (NACC) over the rice fiasco. She has been given until March 14 to defend herself. The NACC will then decide whether there is a case to pursue and, if it goes ahead, she may be forced to step down.

A grenade was lobbed into the grounds of the NACC building late on Tuesday. No one was hurt. Parties of Thaksin have won every election since 2001 and the main aim of the protesters is to change the electoral system to end his influence. They disrupted a general election held on Feb. 2 that Yingluck looked set to win. Thaksin, a former telecoms tycoon, has lived abroad since 2008 to avoid a jail term for a graft conviction he says was politically motivated.

At least 23 people have been killed in the unrest since Nov. 30, including four children in Bangkok and the eastern province of Trat. Hundreds of people have been hurt
Last Update: Mar 05, 2014 12:32 pm
RELATED TOPICS