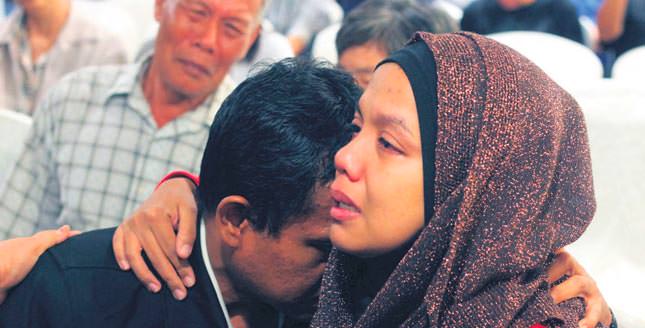 The Malaysia Airlines plane missing in the South China Sea since Saturday may have turned back before losing contact, an official said yesterday. Families and friends wait to hear news of their loved ones

Kuala Lumpur (Agencies) - Malaysia Airlines flight MH370 with 239 people on board went missing on Saturday while on its way from Kuala Lumpur to Beijing, airline officials said.

There were indications that the Boeing 777-200 passenger jet bound for Beijing turned around shortly before disappearing near the border between Malaysian and Vietnamese airspace, Malaysian Armed Forces Chief Zulkifeli Zin told reporters. The area for search and rescue operations had been expanded to allow for the possible change of course, he said.

Malaysian Prime Minister Najib Razak on Sunday met with relatives of passengers of the Malaysia Airlines plane, the state-run news agency said. Malaysian Airlines said it will begin flying up to five relatives of each missing passenger from flight MH370 from Beijing to Kuala Lumpur on Monday.

"Family members of the MH370 passengers from Beijing who wish to travel will be flown in stages to Kuala Lumpur on the available flights," said Ahmad Jauhari Yahya, the airline's chief executive. "We are also communicating with the families from other nations to similarly arrange for their travel to Kuala Lumpur," he said. Aircrafts from a number of countries resumed the massive search for the Boeing 777-200 passenger jet that vanished early Saturday about an hour after departing from Kuala Lumpur headed for Beijing. "It has been more than 24 hours since we last heard from MH370 at 01:30 am," Malaysia Airlines said in a statement. "The search and rescue team is yet to determine the whereabouts of the Boeing 777-200 aircraft." The missing aircraft was carrying a total of 227 passengers, including 2 infants, and 12 crew members.

Meanwhile, international police agency Interpol also confirmed "at least" two passports recorded as lost or stolen in its database were used by passengers on board the missing Malaysia Airlines flight and said it was checking for other suspect passports. Interpol said no checks of its database had been made by any country on an Austrian and an Italian passport between the time they were stolen and the departure of the flight. "Whilst it is too soon to speculate about any connection between these stolen passports and the missing plane, it is clearly of great concern that any passenger who was able to board an international flight using a stolen passport listed in Interpol's databases,"
Interpol Secretary General Ronald Noble said in a statement.The police agency said it was in contact with its offices in the countries involved to try to establish the true identities of the passengers who boarded the flight using the stolen documents. It said it is also checking all other passports on the flight "which may have been reported stolen."

Noble expressed frustration that few of Interpol's 190 member countries "systematically" search the database to determine whether documents being used to board a plane are registered as lost or stolen.

The flight from Kuala Lumpur to Beijing disappeared from radar screens after take-off early on Saturday with 239 people on board, and the aircraft has not yet been located despite dozens of vessels searching the sea under
its flight path.