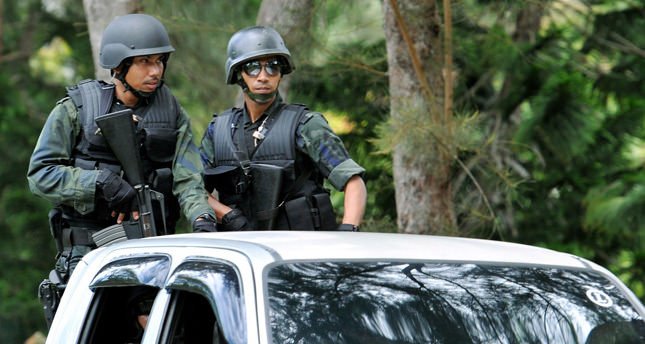 KUALA LUMPUR – Malaysia border control personnel say they have arrested 62 Uyghurs suspected of attempting to enter the country illegally at its northern border with Thailand - the second round-up in days of immigrants to the region claiming to be from Turkey.

Malaysian General Operations Force (GOF) Assistant Commanding Officer Deputy Superintendent Sivam told media that the "the Turks" were discovered at the Malaysia-Thailand border fence at about 5.30am on Thursday.

Police said they were not carrying any identification papers or valid travel documents to enter the country.

Thai immigration police said Thursday that they had detained around 200 people claiming to be "Turkish refugees" who had been found in a "secret camp" in Thailand's south.

Police General Thatchai Pitaneelaboot, a commander at the country's Immigration Bureau for the south, said the "refugees" had identified themselves as Turkish and were arrested after a raid on a camp in a rubber plantation on Wednesday night in Songkhla province in Thailand's south, which borders Malaysia.

The Turkish Embassy in Bangkok told the Anadolu Agency on Friday that it had sent the first counselor and the third secretary to the location for inspection.

"They are there to investigate the case," it added.

The Star reported that one of the immigrants arrested in Malaysia who could speak English had said during interrogation that the group was mainly family members and friends from Turkey's capital, Ankara.

They were given food before they were transferred to the Immigration Department.

Meanwhile, in capital Kuala Lumpur, police have nabbed 12 more immigrants, including five children -- also claiming to be Turkish citizens -- after chasing and stopping a car.

A police officer noticed the overloaded Thai-licensed plate car March 12 and ordered it to stop.  However, the car sped off before crashing into two parked vehicles.

The 32-year-old Malaysian driver was arrested while none of the foreigners had any identification documents on them.

There are no known previous cases of large numbers of Turkish illegal migrants arrested in Thailand or Malaysia.

However, Thailand has detained more than 500 Rohingya refugees during raids on a suspected people-trafficking camp in the deep south, a predominantly Muslim region which has been plagued by a long-running insurgency.