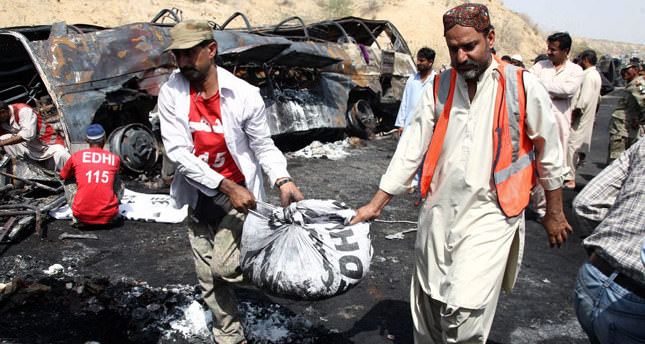 A bus bound for Karachi collided with one of the tanker trucks coming from the opposite direction and then both hit the two other vehicles
and all caught fire, police official Ahmed Nawaz said.

The collision occurred on a coastal highway in the Gaddani area of Balochistan province, said Jan Muhammad Buledi, a spokesman for the
provincial government.

At least 20 people were injured in the accident, Buledi said.

Some of the bodies were charred beyond recognition and DNA testing was being conducted to ascertain their identities, said a doctor at
the civil hospital in Karachi.

Buledi said the buses caught fire because they were carrying canisters of smuggled Iranian gasoline and diesel on top of them.