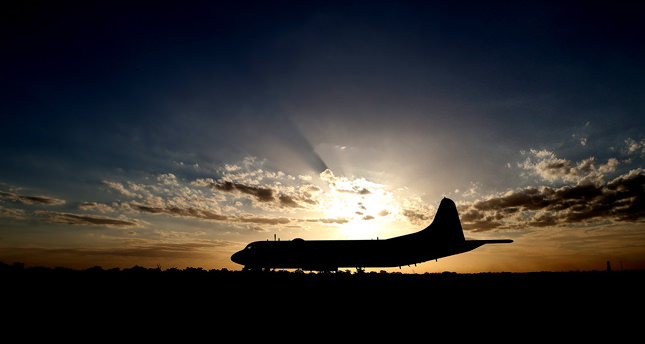 by French Press Agency - AFP Mar 24, 2014 12:00 am
PERTH, Australia — Ships and planes from several nations swarmed over a lonely corner of the southern Indian Ocean on Monday as mounting evidence of floating debris energised the search for Malaysia's missing passenger jet.

But the roiling seas characteristic of the region threatened once again to foil search personnel who have failed to turn days of tantalising leads into hard evidence that could help solve the baffling mystery of Malaysia Airlines flight MH370.

The report added to an Australian aircraft's visual sighting Saturday of a wooden pallet, strapping and other debris, and subsequent French and Chinese satellite information indicating floating objects far off Australia's west coast.

A growing international fleet of military and civilian aircraft has converged on the area, around 2,500 kilometres (1,500 miles) southwest of
Perth, supported by Australian and British naval vessels tasked with retrieving any objects from the forbidding waters.

MH370 vanished without warning on March 8 over the South China Sea en route from Kuala Lumpur to Beijing with 227 passengers and 12 crew.

Malaysia believes the plane was deliberately diverted by someone on board. But the absence of firm evidence has fuelled intense speculation and conspiracy theories, and tormented the families of the missing.

As the reports of debris proliferated, Australia's Deputy Prime Minister Warren Truss cautioned against false hopes in a search that has hit a number of dead ends.

"We're just, I guess, clutching at whatever little piece of information comes along to try and find a place where we might be able to concentrate the efforts," he told national radio.

The US Navy added to the sense of an approaching denouement, ordering a specialised device sent to the region to help find the plane's "black box" of flight and cockpit voice data -- crucial in determining what happened to the Boeing 777.

The move was taken to ensure that black box detection can start "as quickly as possible" after confirmed debris is found, it said.
The 30-day signal from the black box is due to fail in less than two weeks.

The search had initially focused on waters around Southeast Asia but swung deep into the Indian Ocean last week after initial satellite images depicted large floating objects there.

AMSA said 10 aircraft were now involved in a search beefed up by the inclusion of two Chinese military aircraft -- two thirds of passengers were Chinese -- which took to the air Monday, joining Australian, US, and Japanese planes.

It said, however, that Tropical Cyclone Gillian, hundreds of kilometres to the north, would not affect the area under scrutiny.

Satellite and military radar data suggest MH370 backtracked over the Malaysian peninsula and then flew on -- possibly for hours -- to parts unknown.

Leading theories include a hijacking, pilot sabotage, or a sudden mid-air crisis that incapacitated the flight crew and left the plane to fly on auto-pilot until it ran out of fuel.

If a crash is confirmed, recovering the black box will be far more difficult than for the Air France jet that went down in the Atlantic in 2009, said Charitha Pattiaratchi, an oceanographer at the University of Western Australia.

"We have to remember that Air France 447 took two years to find and this is a more challenging region where the environment is much, much harsher. There are bigger waves and it's windier," he said.

He said wave heights could double to seven metres in coming days.

The grief and frustration of Chinese relatives has repeatedly boiled over, including during weekend meetings in Beijing where police had to restrain angry relatives who accused Malaysian officials of withholding information.

"Very often I feel like I'm about to go insane. My emotions are all over the place. I asked the Malaysians to give the answers and they said they couldn't," one relative said Sunday.

Malaysia Airlines suffered another headache early Monday when a flight from Kuala Lumpur to Seoul had to divert to Hong Kong due to a malfunctioning electrical generator.

The airline said back-up systems kicked in and the plane, with 271 passengers, landed "uneventfully."