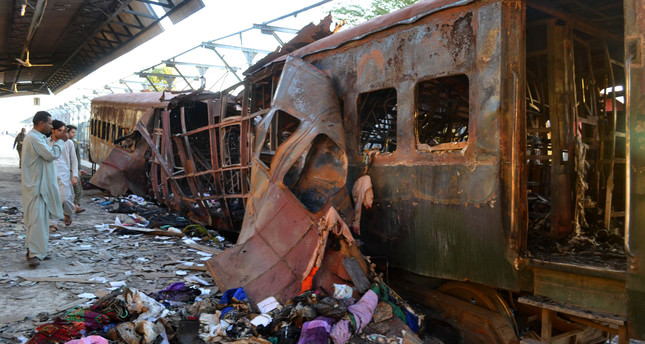 by Associated Press
Apr 08, 2014 12:00 am
QUETTA, Pakistan — A bomb ripped through a railway car parked at a station in southwestern Pakistan, killing 16 people and sending flames and smoke billowing into the air, officials said. The explosion in the town of Sibi also wounded more than 40 people, said district police chief Gulam Abbas Tarar. He put the death toll at 16.

The Pakistani television stations showed images of the burning car, with flames shooting out of the windows and smoke billowing into the sky. A little-known separatist group later claimed responsibility for the bombing. Sibi is in Baluchistan province, Pakistan's largest region. The train was going from Quetta, the capital of Baluchistan, to Rawalpindi, which is next to the capital of ıslamabad. Sibi is located about 150 kilometers (90 miles) east of Quetta.

The bomb went off after it reached the Sibi station and passengers were boarding and disembarking from the cars, officials said. Federal Minister for Railways Saad Rafiq told Geo TV that initial reports suggest a woman left explosives on the train car and then got off the train when it arrived at the station.

The deputy commissioner of the district, Suhail-ur-Rehman, said it might have been concealed in someone's luggage but emphasized that authorities were still investigating. Baluchistan has been plagued by violence from various factions for years and Pakistani troops have been battling both Baluch separatists as well as sectarian groups in the area.

Later Tuesday, a spokesman for the separatist United Baluch Liberation Army claimed responsibility for the bombing and warned of more such attacks in future. The attack was in retaliation for a military operation on Monday against the group's activists in the province, said Mureed Baluch, the spokesman. Earlier, Rafiq, the federal minister, also said the blast could have been retribution for Monday's operation, which killed at least 30 militants. The paramilitary Frontier Corps said they killed the militants in Khuzdar, a mountainous region southeast of the Baluch capital, during an operation targeting their hideouts. The Frontier Corps said 10 of its troops were also wounded in the operation.