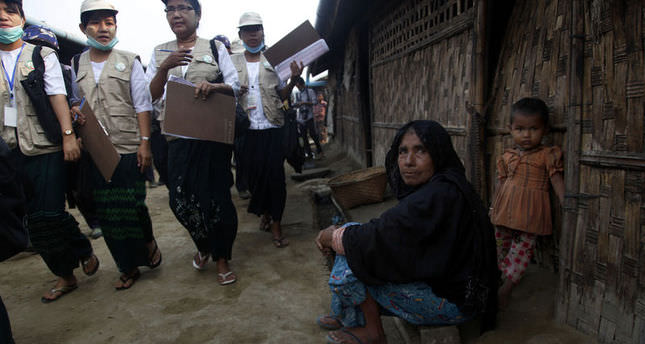 by reuters
Apr 08, 2014 12:00 am
YANGON — A U.N. envoy on Monday urged Myanmar to allow the return of aid groups forced to flee attacks in Rakhine state, warning their departure threatened "severe consequences" for Muslims sheltering in camps from violence by majority Buddhists.
Tomas Ojea Quintana, the U.N.'s Special Rapporteur on the human rights situation in Myanmar, said water shortages could reach critical levels within a week in some displacement camps, where 140,000 people live as a result of communal conflict since 2012.
Some 700,000 people outside the camps are also vulnerable, the U.N. said in a statement.
Recent developments in Rakhine State were the latest in a long history of discrimination against the Muslim Rohingya community, which he said "could amount to crimes against humanity".
Trouble broke out on March 27 after rumors spread that a female international aid worker had desecrated a Buddhist flag. Some 400 rioters massed outside Malteser International's office and began throwing stones before attacking other buildings occupied by aid groups and the U.N.
The Rakhine state government said last week that international aid organizations would be allowed to resume their work "later this month", but did not specify a date.
"Every day that goes by there is an increased chance of people dying because they don't have access to medical services," said Pierre Peron, spokesman for United Nations Office for the Coordination of Humanitarian Affairs.
"The clock is ticking," he said.
Last Update: Apr 08, 2014 6:49 pm