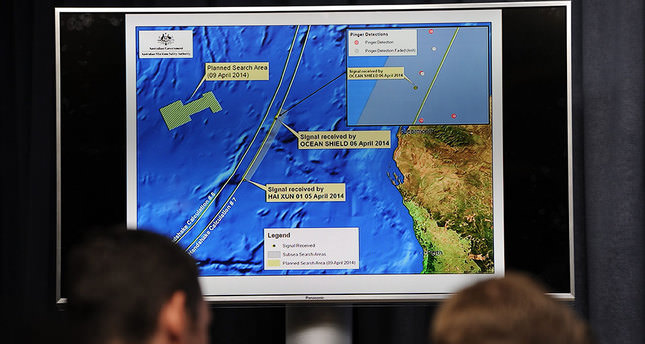 by Apr 09, 2014 12:00 am
PERTH — Two fresh signals have been picked up in the search for missing Malaysian flight MH370, raising hopes Wednesday that wreckage will be found within days even as black box batteries start to expire.

Australian ship Ocean Shield detected the signals Tuesday to match a pair of transmissions picked up over the weekend that have been analysed as consistent with signals from the plane's flight data recorder, the head of the search said.

The Australian ship has now picked up four transmissions, crucial information as searchers try to pinpoint the crash zone for the Malaysia Airlines Boeing 777 that disappeared on March 8 with 239 people on board.

Officials had feared that the signals which were initially picked up might not be detected again, particularly since the batteries on the black box tracking beacons have a normal lifespan of about 30 days.

The new transmissions, found in the same broad area as the previous two, lasted for five minutes and 32 seconds and about seven minutes respectively, Houston said.

"Yesterday's signals will assist in better defining a reduced and much more manageable search area on the ocean floor," Houston said.
"I believe we are searching in the right area but we need to visually identify the aircraft before we can confirm with certainty that this is the final resting place of MH370."

Houston again urged caution for the sake of the families of those aboard the flight which mysteriously vanished en route from Kuala Lumpur to Beijing, and said the search for more signals would go on.

"Hopefully with lots of transmissions we'll have a tight, small area and hopefully in a matter of days we'll be able to find something on the bottom that might confirm that this is the last resting place of MH370," Houston told reporters.


The hunt was now narrowing, with experts confirming the first transmissions were consistent with black box recorders.
"The analysis determines that a very stable distinct and clear signal was detected at 33.331 kHz and that it consistently pulsed at a 1.106 second interval," Houston said.

"They therefore assessed that the transmission was not of natural origin and was likely sourced from specific electronic equipment.
"They believe the signals to be consistent with the specification and description of a flight data recorder."

Authorities have been searching a linear arc produced from satellite data and believed to represent the last stretch of the plane's flight path.
While China's Haixun 01 vessel initially reported some acoustic signals at the southern end of this trajectory, these have not occurred again, Houston said.

No other ships will be allowed near the Ocean Shield, as its work must be done in an environment as free of noise as possible, but a modified RAAF AP-3C Orion was parachuting sonar buoys into the vicinity.

These will float on the surface and have a hydrophone attached dangling 1,000 feet below to hopefully pick up any emissions, although officials warned these could be dulled by thick silt on the seabed.

With the clock ticking on how long the black boxes could feasibly continue to transmit, Houston said it would not be long before a US-made autonomous underwater vehicle called a Bluefin 21 would be sent down to investigate.

Houston said officials were probably close to using this device because the last acoustic signal was very weak, indicating the batteries were running down.

"I don't think that time is very far away," he said.

He said the Ocean Shield could search six times the area with the towed pinger locator that could be done with a sonar on the Bluefin.
Up to 11 military aircraft, four civil planes and 14 ships were searching Wednesday over a zone covering 75,423 square kilometres (29,000 square miles), Australia's Joint Agency Coordination Centre said.

The focus of the search area is 2,260 kilometres (1,400 miles) northwest of Perth. The case of the missing jet has baffled aviation experts and frustrated the families of those on board, two-thirds of whom were Chinese.

Despite extensive searches on the ocean surface, no debris has yet been found but Houston said the visual searching would continue.

The retired Air Chief Marshal voiced optimism despite the challenges of searching 4.5 kilometres (2.8 miles) below the surface in a remote patch of the Indian Ocean.