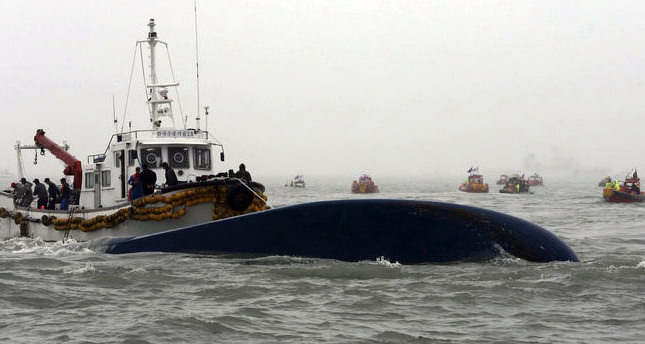 by Apr 18, 2014 12:00 am
SEOUL — Twenty-five people have been confirmed dead in the sinking of a South Korean ferry, authorities said Friday. The coast guard said another 271 people were still missing, the Korean News Agency reported.

All bodies recovered to date were found floating in the sea rather than retrieved from the wreck of the ferry.

The Sewol sank on Wednesday while travelling from Incheon near the capital Seoul to the southern resort island of Jeju.

Investigators were reportedly looking into the possibility that the ship's cargo shifting was the reason for the ferry sinking. The ship carried vehicles and shipping containers in addition to passengers.

The ship's captain, identified only by his surname Lee, was under investigation on suspicion of violating shipping law and being one of the first to leave the stricken ship while there were passengers still in danger.

There were 475 passengers and crew on the vessel when it began to list, capsized and sank. Among the passengers were 325 students and 15 teachers from Danwon High School in Anson, near Seoul.