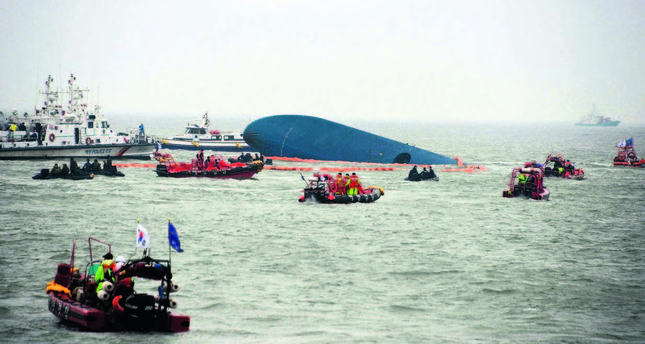 The captain of the South Korean ferry that capsized off the southwest coast is facing a criminal investigation for abandoning the ship as it sunk. Officials say, of the 475 passengers, 179 have been rescued and 9 people were found dead

JINDO — The Sewol ferry was carrying 475 passengers and crew when it capsized on Wednesday. The government has said nine people were found dead and 179 had been rescued, leaving about 290 people, most of them teenaged school children, missing and possibly trapped in the vessel.

The captain, identified as Lee Joon-seok, 69, is being questioned yesterday by the coastguard and is the subject of a criminal investigation, a coastguard official said.

Media reports said he was facing the possibility of charges of negligence leading to death and also for violating a law that stipulates the conduct of shipping crew. Coastguard officials could not be reached for further details. "It's still an early stage and we're questioning the circumstances," said one coastguard official in the town of Mokpo, which is the center of the investigation.

Television showed the captain sitting hunched over, wearing a hooded jacket, at the coastguard center in Mokpo yesterday. "I apologize to the passengers and victims and families," he said, declining to answer questions about what happened and why he abandoned the ship when he did.

Coastguard investigators have not given reporters access to the captain since then.

Lee was filling in for the regular captain, who was on leave, but had been at sea for 40 years and had travelled on the route before, ferry operator Chonghaejin said.

No survivor has been able to specify exactly when the captain left the vessel although several said he left early. At the time, other witnesses said, the crew was asking passengers to remain calm and stay where they were.

One survivor told a South Korean television station: "I was one of the first ones to jump on a coastguard boat and there were several others, and I heard from one of the rescuers that the captain was on the boat before me."

Other survivors also said the captain was one of the first to be rescued. Coastguard officials declined to comment when asked for confirmation.

The ferry operator declined to comment on the captain's action, saying it was under investigation by the coastguard.

Families of the missing were outraged at the reports of the captain being one of the first to jump ship. "It's despicable and I'm mad as hell, but this is really not the time to talk blame, it's the rescue of these kids that comes first," said Lee Yong-ki, father of one of the missing children.

About half of the 30 crew members have been rescued.

It took the ferry about two hours to sink and most of the survivors were those who made it out on to the deck and then waited for help, holding on to the rails, or jumped into the sea to be picked up by rescue boats.

The crew was appealing to the passengers to remain where they were when it started sinking. "It is outrageous that they didn't tell people to get out," said Choi Min-ji, one of the high school students who survived. "They kept saying 'stay put' even when the water was coming in. I almost got trapped too and barely came out alive. If they did it (told people to get out) there would have been fewer casualties."