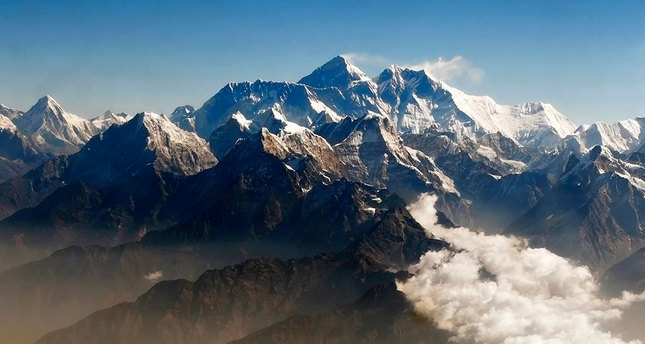 by Apr 19, 2014 12:00 am
KATHMANDU, Nepal — Rescuers recovered the body of one mountain guide on Saturday after an ice avalanche swept the lower slopes of Mount Everest, bringing the death toll to at least 13 in the deadliest accident on the world's highest mountain.

The avalanche struck a perilous passage called the Khumbu Icefall, which is riddled with crevasses and piled with serac - or huge chunks of ice - that can break free without warning.

"We were tied on a rope and carrying gas to camp when there was a sudden hrrrr sound," said Ang Kami Sherpa, 25, one of at least three survivors flown by helicopter to Kathmandu. "We knew it was an avalanche but we couldn't run away or do anything.

"There was a big chunk of snow that fell over us and swept us away. It looked like clouds, all white," he said in a hospital intensive care unit where he was being treated for a blood clot on his leg and facial injuries.

Climbers declared a four-day halt to efforts to scale the 8,848-metre (29,029-ft) summit and, while some decided to abandon their mission, others said they would go ahead after talking to their guides. All of the victims were sherpa mountain guides. "Everyone is shaken here at Base Camp. Some climbers are packing up and calling it quits, they want nothing to do with this," Tim Rippel of Peak Freaks Expeditions wrote in a blog.

Shocked relatives wondered how they would cope without the men who take huge risks to earn up to $5,000 for a two-month expedition - around 10 times average annual pay in Nepal.

"He was the only breadwinner in the family," said 17-year-old Phinjum Sherpa, as she waited for the body of her uncle, Tenji Sherpa, at a Buddhist monastery in Kathmandu. "We have no one to take care of us."

Although relatively low on the mountain, climbers say the icefall is one of the most dangerous places on Mount Everest. There are, however, no safer paths along the famous South Col route scaled by Sir Edmund Hillary and Tenzing Norgay in 1953.

Around 100 climbers and guides had already passed beyond the Khumbu Icefall to prepare their attempts on the summit. They are safe, but a new path will have to be made to make it possible to continue the expeditions.

Rippel's sherpas had lucky escapes - two returned to base camp five minutes before the avalanche hit, while two were briefly trapped above the avalanche but managed to make their way down, he wrote.

The fatal incident was the result, some climbers said, of a so-called ice release and not a more typical snow avalanche.

"When the serac hovering off the West Shoulder of Everest collapsed, it sent house-sized ice blocks all over the route," Alan Arnette, a climber and motivational speaker, wrote in an updated blog post from Base Camp.

"With hanging ice, it may stay there for decades or fall tomorrow - there is no way of knowing or predicting."

Sherpas often make 20-25 round trips to carry kit and supplies to advanced camps, exposing them to greater risk. The most endangered are the so-called Icefall Doctors - a team that maintains and fixes the route. "It's always the most dangerous part of the mountain to climb, because the ice is constantly moving, there are so many crevasses and seracs where you need to use ladders and ropes to get through the very technical terrain," Californian climber Adrian Ballinger, of Alpenglow Expeditions, told Reuters.

It was first major avalanche of this year's climbing season on Everest, which has been scaled by more than 4,000 climbers.

Some 250 mountaineers have died on the mountain, which is on the border between Nepal and the Chinese region of Tibet and can be climbed from both sides in a season that is cut short in late May by rainy-season clouds cloaking the Himalayas.

Expedition leaders reported that there was anger among some guides after the government announced immediate payments of $400 to the victims' families to cover funeral costs. Dependents of guides killed in the past said compensation did not nearly cover loss of income from the main family breadwinner.

"The government doesn't do anything for the welfare of sherpas," said Chhechi Sherpa, a sister of 37-year-old Ang Kaji Sherpa, who was killed on Friday and leaves elderly parents and a family with six children.

"It makes good money from tourists and climbers but doesn't care about the sherpas who struggle to support their families. The government must look after the kids and old parents of those sherpas who died in the avalanche."

The government has issued permits to 334 foreign climbers this season, up from 328 for all of last year. An equal number of guides also climb to help the foreign mountaineers.