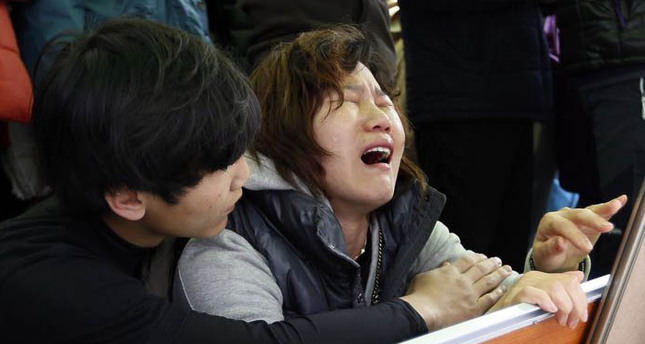 by AA Apr 20, 2014 12:00 am
SEOUL — South Korean divers have entered the sunken ferry Sewol to recover more bodies, as the death toll reached 58 Sunday. Most of the victims are high school students.

There are only 174 known survivors, with no one rescued since Wednesday.

Sixteen more bodies were recovered early in the morning from the wreck of the boat, which sank Wednesday in waters off South Korea's southwestern coast. On board the 6,825-ton ferry, travelling from Incheon to the resort island of Jeju, were 476 people, most of them high school students - 246 passengers are still feared to be inside the ship.

The first funerals were held Sunday amid an angry protest involving dozens of families staying at a gymnasium on the island of Jindo, near the site of the sinking.

The captain of the ferry and two of his crew were arrested Friday, accused of steering the ship into trouble and delaying the ship's evacuation before they made their own escape.

Investigators are also yet to discover whether the Sewol hit an object underwater as speculation continues over the cause of a reported thud before it capsized.