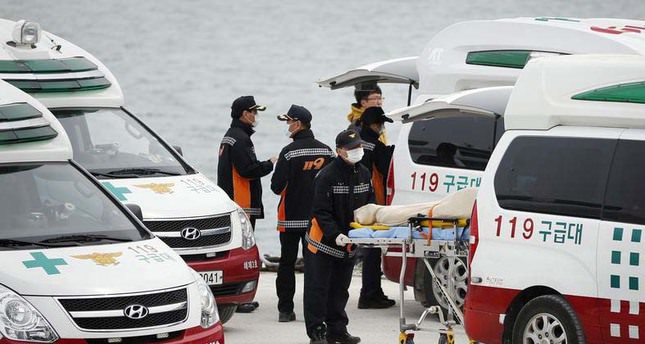 by AA Apr 22, 2014 12:00 am
SEOUL — Rescue divers took advantage of improved weather conditions around the submerged vessel on Tuesday, allowing divers to retrieve more bodies while lifting the death toll to 108.

Nearly a week has passed since the Sewol ferry sank while carrying 476 people – mostly high school students – bound for the resort island of Jeju from Incheon.

On Tuesday, South Korea's period of mourning continued with families and friends holding a series of funerals for those who had lost their lives on the ferry, including a 22-year-old crewmember turned heroine.

Park Ji-young grabbed local headlines for sacrificing her own life to save students on the sinking ship, even as her captain and other crew members escaped.

Captain Lee Jun-seok was arrested Friday on suspicion of negligence of duty and violation of maritime law.

Several others among his staff were also being investigated in the wake of the sinking amid public fury over the ship's delayed evacuation.

South Korean President Park Geun-hye on Monday likened their actions to "murder," although the probe into the cause of last Wednesday's tragedy continues