China believes arms firm did not violate rules in Syria 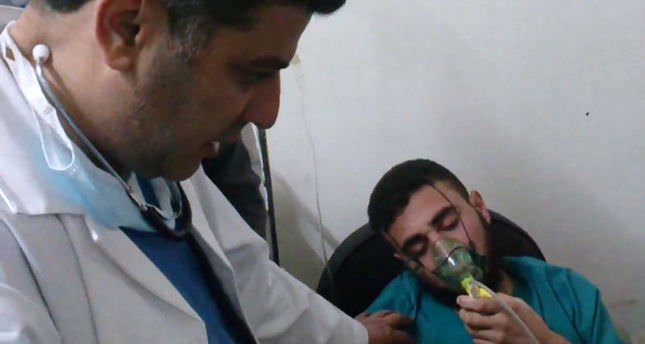 by Apr 25, 2014 12:00 am
BEIJING —China's foreign ministry said on Friday that it did not believe that the country's biggest arms maker had violated any international conventions, after a canister bearing its name was shown in footage believed to document a gas attack in Syria.

Attacks this month in several areas in Syria share characteristics that have led analysts to believe that there is a coordinated chlorine bomb campaign, with growing evidence that it is the government side using chemical weapons.

In the rebel-held village of Kfar Zeita in the central province of Hama, 125 miles north of Damascus, opposition activists uploaded video of people choking and being fed oxygen following what they said were bombs dropped from helicopters on April 11 and 12.

Further footage showed a partially exploded canister with the chemical symbol for chlorine along with the name of Chinese arms manufacturer Norinco.

"We believe that the Chinese company, when it was engaged in this business... did not violate relevant international conventions," he told a daily news briefing.

"Of course, we will take an earnest and responsible attitude in investigating this matter," Qin added.


Syria has vowed to hand over or destroy its entire chemical weapons arsenal by the end of this week, but still has roughly 14 percent of the chemicals it declared to the Organisation for the Prohibition of Chemical Weapons (OPCW).

In addition, the alleged battlefield use of chlorine gas, never included on the list submitted to the OPCW, has led some countries to consider requesting an investigation, possibly through the United Nations.

Syrian President Bashar al-Assad agreed with the United States and Russia to dispose of his chemical weapons - an arsenal that Damascus had never previously formally acknowledged - after hundreds of people were killed in a sarin gas attack on the outskirts of the capital last August.

Washington and its Western allies said it was Assad's forces who unleashed the nerve agent, in the world's worst chemical attacks in a quarter-century. The government blamed the rebel side in Syria's civil war, now in its fourth year.

China and its ally Russia have vetoed Western efforts to impose U.N. penalties on Assad. But China, seeking to show it is not taking sides, has urged the government to talk to the opposition and take steps to meet demands for political change.