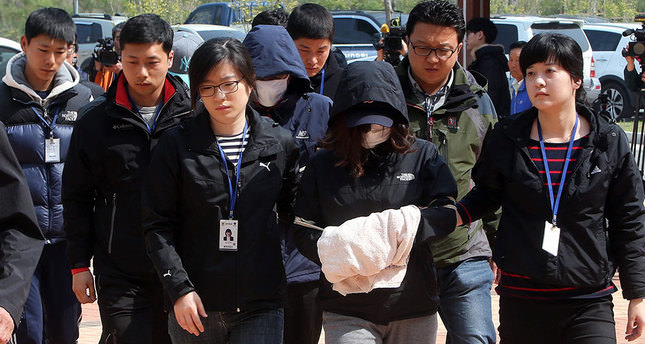 by AA Apr 27, 2014 12:00 am
SEOUL — Four more crewmembers were arrested late Friday amid an investigation into the delayed evacuation of a ferry that sank off South Korea's southwestern coast earlier this month, leaving more than 300 passengers dead or missing.

All 15 members of the ill-fated Sewol ferry's crew, including the vessel's captain, have now been taken into custody and face charges of criminal negligence.

Police and prosecutors are also investigating the ferry's shipping company, Chonghaejin Marine, to establish whether the Sewol had been fit for purpose.

After seizing another ferry run by the firm, investigators found that life rafts and escape shoots were not working properly.

The Sewol had been carrying 476 people, mostly high school students, from Incheon to Jeju Island when it ran into trouble on April 16.

Divers have since pulled bodies from the wreckage on a near daily basis, with the official death toll standing at 187 on Saturday while 115 others remain unaccounted for.

The passengers were initially told to stay within the ship and transcripts show it took around 30 minutes for an evacuation to be ordered.

The bodies of 48 students were found Friday within a single room designed to accommodate just over 30 people.

With South Korea grieving, U.S. President Barack Obama paid his condolences in person during a previously scheduled trip to the country on Friday.

"So many were young students with their entire lives ahead of them," Obama told reporters alongside his South Korean counterpart Park Geun-hye. "I can only imagine what the parents are going through at the moment - the incredible heartache."

Obama also led a moment of silence and offered a magnolia tree and a flag, which had flown over the White House on the day the Sewol sank, in honor of the victims.

Park responded, "The Korean people draw great strength and courage from your kindness."

Investigators are yet to uncover why the vessel sank.

The last major South Korean ferry disaster was in 1993, when 292 of 362 passengers died in the Yellow Sea in North Jeolla Province.
By Alex Jensen - Anadolu Agency