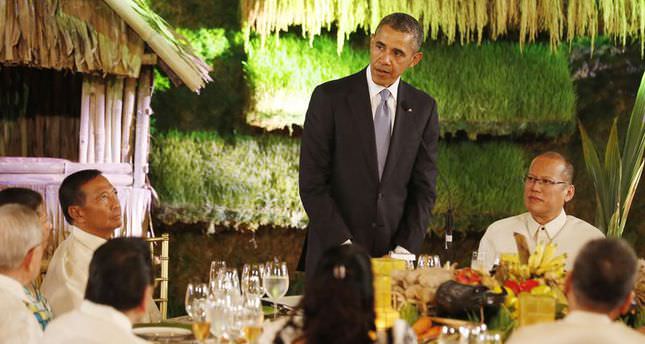 by Associated Press Apr 29, 2014 12:00 am
MANILA,Philippines — President Barack Obama said a 10-year agreement signed yesterday to give the U.S military greater access to Philippine bases will help promote peace and stability in the region and that he hopes China's dominant power will allow its neighbors to prosper on their own terms.

The Enhanced Defense Cooperation Agreement signed as Obama arrived in the Philippines will give American forces temporary access to selected military camps and allow them to preposition fighter jets and ships. It is being seen as an effort by Washington to counter Chinese aggression in the region, and Obama said his message to China is, "We want to be a partner with you in upholding international law."

Obama's overnight visit to the Philippines is the last stop of a weeklong Asia tour that also included Japan, South Korea and Malaysia. At each stop along his tour, Obama reaffirmed the U.S. treaty commitments to defend its Asian allies, including in their territorial disputes with China.

"We don't even take a specific position on the disputes between nations but as a matter of international law and international norms we don't think that coercion and intimidation is the way to manage these disputes," Obama said. He added that when the U.S. has disputes with its neighbors, it works them out through dialogue. "We don't go around sending ships and threatening folks."

With its anemic military, the Philippines has struggled to bolster its territorial defense amid China's increasingly assertive behavior in the oil- and gas-rich South China Sea, which Obama flew over on his way here, according to the Air Force One cockpit. Chinese paramilitary ships took effective control of the disputed Scarborough Shoal, a rich fishing ground off the northwestern Philippines, in 2012. Last year, Chinese coast guard ships surrounded another contested offshore South China Sea territory, the Second Thomas Shoal.

Aquino, standing next to Obama in front of a lush backdrop of tropical plants, said the new agreement with the U.S. "takes our security cooperation to a higher level of engagement ... and promotes regional peace and stability."

Still, the U.S. increased military role has raised objections from some Filipinos and led to recent clashes outside the U.S. Embassy between police and more than 100 left-wing activists who protested Obama's visit and the new security arrangement. Activists say the agreement reverses democratic gains achieved when huge U.S. military bases were shut down in the early 1990s, ending nearly a century of American military presence in the Philippines, a sensitive issue in this former U.S. colony.

Obama sought to allay those concerns, saying at the outset of his remarks, "I want to be very clear the United States is not trying to reclaim or open new bases." Instead he said the agreement will help improve maritime security and speed response to natural disasters in the region.