ROUBINI: A New Cold War Has Begun, And It's At Risk Of Becoming A Hot War 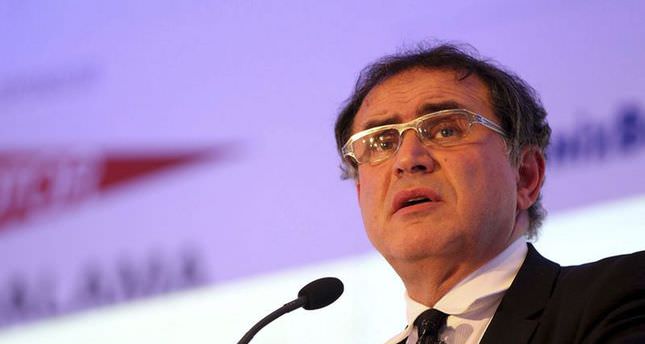 by Apr 29, 2014 12:00 am
Russia and Ukraine continue to be the geopolitical hotspot of the world. The U.S. just imposed stricter sanctions on key Russian officials who are believed to have played a role in escalating the crisis in Ukraine. Economist Nouriel Roubini believes this crisis could certainly escalate.

"There is the beginning now of a new cold war between the West and Russia," Roubini said in an interview with Bloomberg TV's Eric Schatzker and Stephanie Ruhle. "And this cold war could actually become a hot war if it's possible Russia were to effectively destabilize and invade the eastern provinces of Ukraine."

Roubini warned that escalation could disrupt Russia's ability to supply gas to Europe, which could in turn fall back into recession.


Here's an excerpt from the interview transcript:

Schatzker: Yes. We've got to take the opportunity. Let's go global. Nouriel, right now it would seem to most people like the situation that's unfolding in Ukraine, especially as it concerns Russia, presents the single biggest risk, but maybe it isn't. I want you to share with us your view of what's happening there, how you think it's going to unfold, and whether we're missing something bigger.


Roubini: Certainly among the global tail risks, the one coming from Ukraine is the most important one. There is the beginning now of a new cold war between the West and Russia, and this cold war could actually become a hot war if it's possible Russia were to effectively destabilize and invade the eastern provinces of Ukraine, in which case things would escalate. You could have another episode of global risk aversion. If this were to become a real war, (inaudible) even a situation in which the supply of gas to Europe may be cut off from Russia. The European economy is barely now recovering from a recession. That could tip back the eurozone into a recession.

Ruhle: From a risk management from a 1 to 10 scale, how concerned are you that things could get catastrophic there?

Roubini: Well today I would say the risk is around 7 and raising because the situation is (inaudible) one in which Russia seems to be really very aggressive in Ukraine. They want to try to take over Ukraine, and therefore an escalation is likely to occur.

Schatzker: Okay, but an escalation in what form? You talked about the possibility that this might become a hot war, which – which I take to mean the use of force on both sides.

Schatzker: That assumes that NATO will act -

Roubini: Suppose that Russia at this point decides to effectively either to destabilize, invade the eastern province of Ukraine. Two things will happen. The stance (ph) of the West will have to become more Russia and Russia could have (inaudible) going as far as limiting the supply of gas not just to Ukraine but also to Western Europe. Secondly, the NATO, even if they're not going to have a military intervention, they'll have certainty provide some military support to the government in Kiev. And that means that this war could escalate for quite a while. And therefore from a financial market point of view, there may be contagion deriving two (ph) advanced economy's financial market, especially in the eurozone.

Schatzker: But could it really escalate for quite a while? Because we know that if Putin wants to exercise force in a big way, he can. And there's really nobody capable of responding to it other than the United States.

Roubini: Well, the situation is such that even if he wanted to use force there (inaudible) first of all. Secondly, he's not going to invade all of Ukraine. And you don't know for how long a military conflict of this sort is going to continue, especially if the US and Europe were then to support militarily the government in Kiev. This war could continue and last for a while. So I'm saying this is not my baseline, but there is certainly downside risk that that will happen. But even a baseline (inaudible) remains lingering for a while, at some point investor may become worried about it.

Ruhle: What does all this mean for the European economy?

Roubini: Well the eurozone right now is recovering. There's been a severe recession. There's the beginning of an economic recovery, but this is a recovery that's fragile, it's anemic, it's uneven, especially in the periphery of the eurozone. I would say the last thing that the eurozone can afford and need right now is another shock coming from an increase in gas prices and or even a cut off of supply of gas coming from Russia to the Western European economies. That would tip the European economies back into a recession if that were to occur.