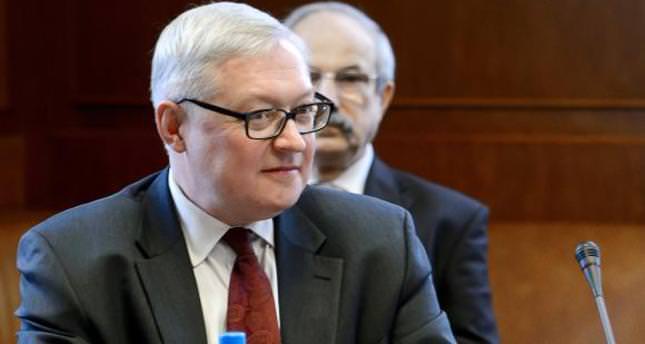 by May 06, 2014 12:00 am
MOSCOW — Iran and six world powers could agree parts of a text of an agreement on Tehran's nuclear program when they meet for a new round of negotiations in Vienna next week, Russia's chief negotiator said in comments published on Tuesday.

Iran, the United States, France, Germany, Britain, China and Russia are working to reach a long-term accord on ending the decade-old dispute over Tehran's atomic activities by a self-imposed July 20 deadline.

The West suspects Iran may be seeking a nuclear weapons capability. Iran says its program is peaceful.

After spelling out their positions in three meetings earlier this year, senior officials from the countries now plan to start drafting a text of a possible deal.

"As a result of this round, we should at least get some elements of the agreed text and elements of the common text," Russian Deputy Foreign Minister Sergei Ryabkov told state-run RIA news agency in an interview.

He did not give details on what areas the partial agreement might cover.

"For now there is no common (text) whatsoever. So if we get such an option, this would be a good result," Ryabkov, Russia's chief negotiator in the talks, said ahead of the meeting that is expected to begin on May 13 and may last for about four days.

Analysts say there is a political will on both sides to reach an agreement but that it will still be very difficult to overcome key differences, especially on the permissible scope of Iran's uranium enrichment program.

Refined uranium can be used to fuel nuclear power plants, Iran's stated aim, but can also provide material for atomic bombs if processed further, which the West fears may be Tehran's ultimate aim.

The powers want a deal that would significantly scale back Iran's nuclear program so that it would not be able to build a bomb any time soon.

Iran wants an end to international sanctions that have severely hurt its oil-dependent economy. It has ruled out closing any of its nuclear facilities, which it says are part of a peaceful atomic energy project.