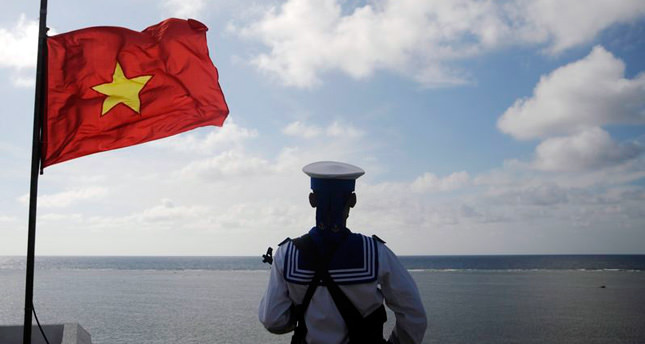 by Anadolu Agency May 07, 2014 12:00 am
BEIJING — Tensions flared in the South China Sea today as armed Filipino police arrested Chinese fishermen near a disputed shoal and Vietnam said a boat collided with a Chinese vessel during a confrontation in waters close to islands claimed by the two countries.

The Chinese fishing vessel and its crew were detained by the Philippines near the Nansha Islands, known as the Spratly Islands in English, Foreign Ministry spokeswoman Hua Chunying said. The incident came as Vietnam said Chinese vessels intentionally collided with one of its navy and coast guard boats near an exploration rig placed by China off the Vietnamese coast near the Paracel Islands.

China has 80 vessels in the area, including seven military craft, Ngo Ngoc Thu, Vice Commander of Vietnam's Coast Guard said at a briefing. Chinese boats fired water at Vietnamese ships and low-flying Chinese aircraft threatened one of the vessels, Thu said. Vietnamese officers were hurt during the clash, he added.

China accused both countries of violating its sovereignty over the island chains, saying Vietnam was being "disruptive" and demanding the release of the fishermen by the Philippines, Hua said at a briefing in Beijing.

The incidents come as China takes a more assertive stance on maritime territorial issues that are souring relations with neighbors from Vietnam to Japan. U.S. President Barack Obama last month visited Asia on to reassured key allies of U.S. support in the face of China's rising economic and military power, while Asian countries have been pushing China to agree to a code of conduct to avoid conflicts on the seas.