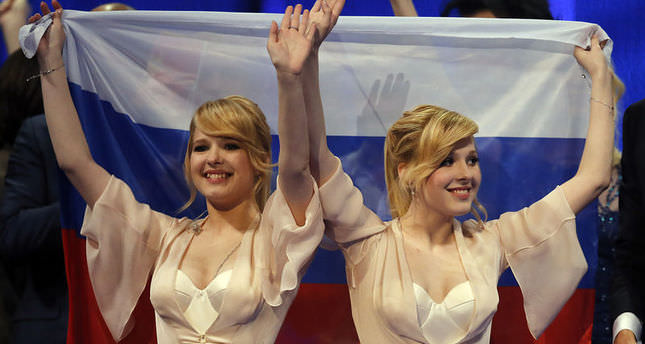 by Anadolu Agency May 08, 2014 12:00 am
COPENHAGEN — The 17-year-old twins initially received a warm reception for their song,Shine, at Tuesday's semi-final. But when they progressed to the final, some sections of the 10,000-strong audience expressed apparent disapproval of the Russian artists.

Experts have said Russia could suffer at Eurovision over the crisis in Ukraine and its stance on gay rights.

Ukrainian contender Mariya Yaremchuck, who also made it into Saturday's final, was less tight-lipped about what is happening in her country.

"Everyone in Ukraine was shocked. Actually when I was preparing in Ukraine I couldn't even focus on working because we were all influenced by that," Yaremchuck said at a press conference in Copenhagen.

"It really affects me because I will try my best to prove that Ukrainians are a strong nation and conflicts end, but music lives. I hope Ukraine will start a new life and a new page," she said.

Geopolitics have always played a role at the kitsch-pop contest where countries can only vote for others, not for themselves.

In 2009 after another Russian military intrusion in Georgia, the country wanted to run with a Putin satire 'We don't wanna Put In', but the organizers said the song was too political and asked either to change the lyrics or run with another song. Subsequently, Georgia withdrew from the contest.

Booing however is rare at the live shows, says Ewan Spence, a Eurovision expert. He could only recall one other rowdy reception – of Sweden at the 2006 Eurovision in Athens.

As for the votes that came from viewers in Crimea, the Ukrainian territory annexed by Russia, the organisers said they would still count for Ukraine.