China blames US for tensions between Vietnam 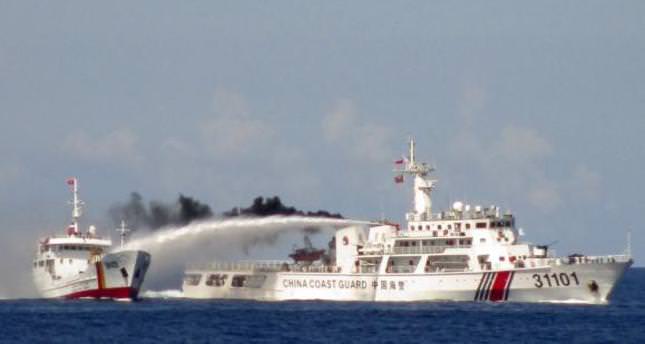 by May 09, 2014 12:00 am
BEIJING — China's foreign ministry blamed the United States on Friday for stoking tensions in the disputed South China Sea by encouraging countries to engage in dangerous behavior, following an uptick in tensions between China and both the Philippines and Vietnam. China this week accused Vietnam of intentionally colliding with its ships in the South China Sea after Vietnam asserted that Chinese vessels used water cannon and rammed eight of its vessels at the weekend near an oil rig.

The United States has called China's deployment of the rig "provocative and unhelpful" to security in the region, urging restraint on all sides. Chinese foreign ministry spokeswoman Hua Chunying repeated that the waters the rig was operating in, around the Paracel Islands, were Chinese territory and that no other country had the right to interfere. "It must be pointed out that the recent series of irresponsible and wrong comments from the United States which neglect the facts about the relevant waters have encouraged certain countries' dangerous and provocative behavior," Hua told a daily news briefing. "We urge the United States to act in accordance with maintaining the broader picture of regional peace and security, and act and speak cautiously on the relevant issue, stop making irresponsible remarks and do more to maintain regional peace and stability," she added.

Tensions are also brewing in another part of the sea, with Beijing demanding that the Philippines release a Chinese fishing boat and its crew seized on Tuesday off Half Moon Shoal in the Spratly Islands. Philippine police said the boat and its crew were seized for hunting sea turtles, which are protected under local laws. Hua said the Philippines' actions were illegal as they had entered Chinese waters to seize the boat and its crew. "We once more demand the Philippines immediately release them unconditionally ... China reserves the right to take further action," she said, without elaborating. Manila says the Chinese boat was seized 60 miles off Palawan island, within a 200-mile (320-kilometre) exclusive economic zone declared by the Philippines.

The incident coincided with annual war games this week in the Philippines involving 5,500 American and Filipino soldiers and marines, focusing on maritime security. Up in the northern Zambales coastline, Philippine and U.S. marines, in rubber boats, assaulted an isolated beach in a mock battle to test the combat readiness of the two oldest allies in Asia-Pacific region. They also conducted a staff exercise focused on maritime security, responding to a simulated attack on a gas platform and pipeline in western Palawan island. "We are only testing our contingency plans. This is purely simulations. We are not talking of any particular third country involved in the attack," said a senior Philippine naval officer, who declined to be named because he was not authorized to talk to the press.