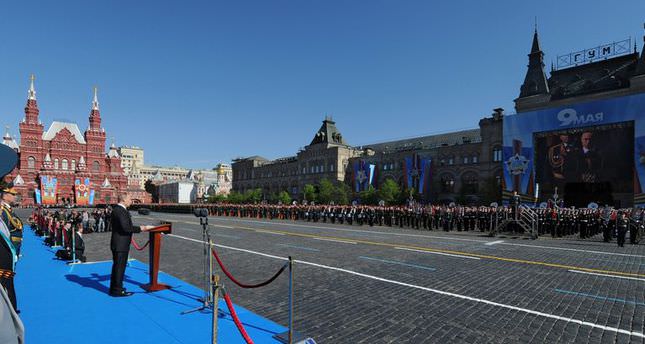 by May 09, 2014 12:00 am
MOSCOW — Tanks rumbled across Red Square and fighter jets screamed overhead on Friday in Russia's biggest Victory Day military parade in years, fuelling patriotic fervour as President Vladimir Putin rallies his people over the Ukraine crisis.

Thousands of goose-stepping troops, motorised artillery and ballistic missile launchers paraded past Putin under the Kremlin's red walls in a show of military might, while jets, helicopters and bombers flew in cloudless skies over Moscow.

State television called it the biggest such parade in 20 years on the holiday honouring the World War Two victory over Nazi Germany, a day which stirs national pride more than any other in Russia.

Meanwhile, President Vladimir Putin arrived in the Crimea region he annexed from Ukraine amid growing tensions as officials said the European Union is preparing to expand sanctions to some Russian companies.

Russia annexed Crimea from Ukraine in March after a pro-European government took power in Kiev following the ousting of pro-Russian President Viktor Yanukovich.