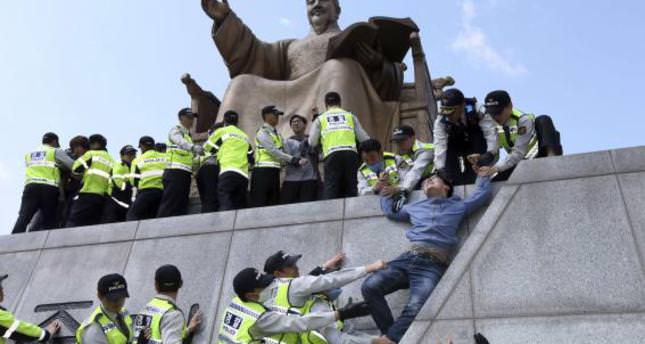 by May 09, 2014 12:00 am
SEOUL — Family members of hundreds of children who drowned when a ferry sank last month sat in the road in a somber vigil steps from the presidential palace on Friday, demanding those responsible be punished.

President Park Geun-hye did not emerge to meet the 400 relatives who had marched in darkness to her Blue House office but sent two of her top aides to listen to their demands, including the sacking of a state broadcast official for insulting comments.

Clutching memorial portraits of their children and brothers and sisters, the family members were prevented by police from nearing the Blue House, and instead sat in the middle of the road where they sobbed, wailed and shouted in anger.

The Sewol, overloaded and travelling too fast on a turn, sank off the southwest coast on a routine journey from Incheon on the mainland to the southern holiday island of Jeju, killing hundreds of children and teachers on a high school field trip.

Only 172 people have been rescued of an estimated 476 passengers and crew on board. The confirmed death toll on Friday was 273.