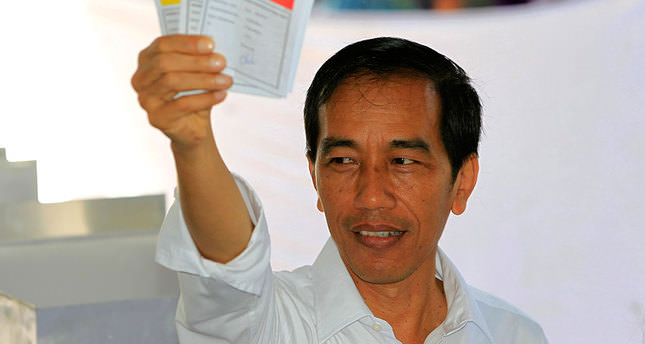 by AA May 11, 2014 12:00 am
JAKARTA, Indonesia — After winning the legislative elections, the Indonesian Democratic Party of Struggle (PDI-P) is headed toward forming a coalition with the country's largest Islamic party.

Muhaimin Iskandar, chairman of the National Awakening Party (PKB), said Saturday the coalition has a good chance of winning the July 9 presidential election as the two parties share the same large base of nationalists and Islamists.

"Despite dominating in terms of quantity, both are equally marginalized in the economic structure," Indonesian media quoted Muhaimin as saying in Surabaya, Indonesia's second largest city.

According to the official vote count for the April 9 elections announced Friday, the PDI-P – with popular Jakarta Governor Joko "Jokowi" Widodo as its presidential candidate - led with over 18 percent.

Meanwhile, the country's Islamic parties surprised by winning over 31 percent of votes. The PKB won 9 percent and replaced the Prosperous Justice Party (PKS), which has faced many corruption cases, as the leading Islamic party.

Nasdem, a newcomer party that won 6.72 percent, had expressed its support for Jokowi's nomination in mid-April.

The coalition guarantees Jokowi's candidacy as the three parties' votes exceed the threshold of 25 percent of the popular vote necessary for a nomination.

Muhaimin said Saturday that the PKB supports Jokowi because of the egalitarian model of leadership that sets him apart from the governing elite.

The popularity of Jokowi, a former little-known furniture retailer with a reputation for incorruptibility, lies in his ability to walk among the masses. A large part of his success can be attributed to his blusukans, or "unscheduled visits." He arrives unannounced, in different parts of the capital to talk with local people about issues affecting them.

Muhaimin added that the PKB advisory board had entrusted 15 agenda issues to Jokowi if he is elected president, including the quality of Islamic education and boarding schools – which are highly valued among the population despite not receiving much government attention in the world's most populous Muslim country.

The PKB has also requested awareness of the economic progress of the marginalized Muslim community.

Jokowi expressed his appreciation of the PKB's decision Saturday night in South Sulawesi province, and said the coalition would be based on understanding and building a better Indonesia, rather than power sharing.

Meanwhile, a coalition between Gerindra, the PKS and the National Mandate Party is close to becoming a reality. For its presidential candidate, Gerindra has nominated its leader Prabowo Subianto, a one-time special-forces commander during the New Order era, when Indonesia was a military dictatorship governed by Suharto until May 1998.

The Democratic Party – ruling since the 2004 and 2009 elections – has not decided on a coalition partner. It finished fourth after several high-profile corruption cases.

To date, the third name slated to run in the presidential election is Golkar leader and tycoon Aburizal Bakri. But analysts predict that only Jokowi and Prabowo will end up competing, with Golkar likely merging with the other parties.