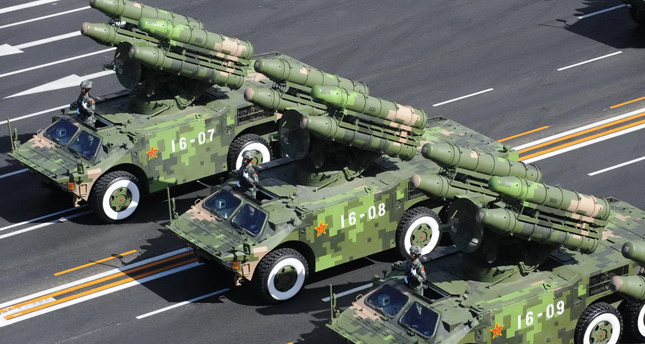 by AA May 13, 2014 12:00 am
BEIJING — The Chinese government expressed its hopes Monday that Turkey's deal for a long-range missile defense system with China would not be politicized.

China's Foreign Ministry Spokesperson, Hua Chunying, said at a daily news briefing, "The cooperation between Chinese enterprises and Turkey is normal cooperation in the field of military trade."

"It is our principle that we hope not to see any normal commercial cooperation being politicized," she added when asked about pressure from the U.S. and NATO on Turkey over the defense system deal.

Turkey, a NATO member state since 1955, announced in September it had decided on an FD-2000 missile defense system – worth US$3.4 billion- from China Precision Machinery Import and Export Corp over systems from the Italian-French and American companies.

However, CPMIEC is currently under sanctions by the U.S. government for its violations of the Iran, North Korea and Syria Non-proliferation Act.

NATO and the U.S. are pressuring Ankara not to build a missile defense system in co-operation with a company from a non-NATO-member state.

Recent reports in Chinese media allege that Turkey has considered other deals with other companies under pressure from its allies.

In early October, U.S. Department of State Spokesperson Jen Psaki had told a daily press briefing, "We of course have conveyed our serious concerns about the Turkish government's contract discussions with a US-sanctioned company for a missile defense system that will not be inter-operable with NATO systems or collective defense capabilities".