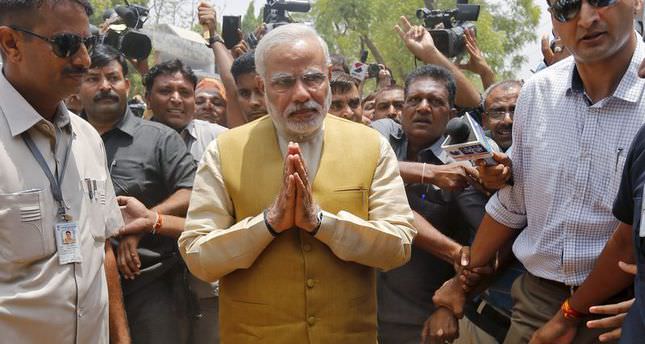 by AA May 16, 2014 12:00 am
NEW DELHI — Narendra Modi looks set to become India's next prime minister with his Bharatiya Janata Party holding a clear lead over the ruling Congress party.

India's election commission has the BJP leading in 280 seats, including six confirmed victories, enough to form a majority. Local media outlets are reporting that together with its allies, the BJP are leading in more than 330 seats out of the 543 in parliament.

The Congress party-led alliance government, which has ruled India since 2004, is heading for its worst performance ever with leads only in 63 seats. Congress has already conceded defeat.

"This is a Modi revolution not a Modi wave. The results are a reflection of aspirations of the 21st century politics. The Congress party is still trapped in the 19th century politics," BJP spokesperson M.J. Akbar told Anadolu Agency.

"In matters of Indian politics, I've not found myself speechless before. Repetitive goose bumps, incessant phone calls, messages of congratulations -- all of them meant little when one reflected upon the decisive intelligence shown by the people of India. Especially, the people of Uttar Pradesh and Bihar," Delhi-based lawyer Kabeer Srivastava told AA. "A diseased party, fraught with sycophant and feudal despots, Congress had to be given a reality check."

Srivastava also hinted that anti-corruption party AAP, whose leader Arvind Kejriwal lost against Modi in Varanasi, was not able to have the same effect on a national level that it had when it formed Delhi's state government in December 2013.

"Real revolutions do not take place on the streets. Most of the times, street revolutions are a theatrical show orchestrated by vested interests who carefully hide themselves from the agitators," he said. "Almost every power shift caused by street revolutions resulted in nothing but forceful replacement of one poor leader with another. People choose not out of considered choice, but give in to knee-jerk reactions, strong arm tactics and unity arising out of fear."

Modi won in both seats he contested -- by 400,000 votes in Vadodara in his home state Gujarat, and in Varanasi in Uttar Pradesh.
"India has won. Good days are ahead," Modi tweeted from his Gandhinagar official residence in Gujarat where he is tracking election results on TV.

The BJP seems to have performed exceptionally well in key Indian states. The party has made impressive gains in India's biggest Uttar Pradesh state, where it is leading 69 of 80 constituencies. In the 2009 election, BJP had won only 10 seats from Uttar Pradesh, the state which makes and breaks prime ministers. The same trend is being followed in adjoining Bihar state where the BJP is leading 21 out of 39 seats, according to the election commission. In contrast the Trinamool Congress, whose leader Mamata Banerjee has been locked in a public dispute with Modi, is leading 34 out of 42 seats in West Bengal.
Last Update: May 16, 2014 1:01 pm
RELATED TOPICS