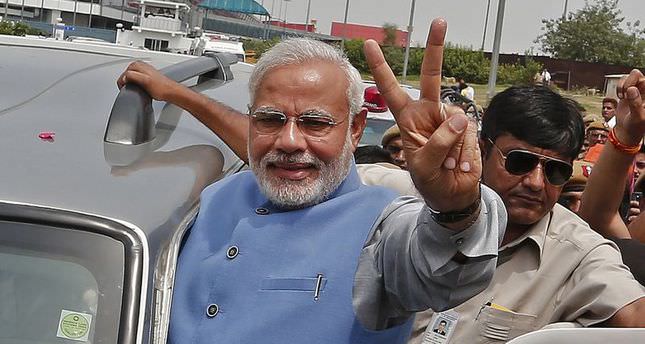 by Anadolu Agency May 17, 2014 12:00 am
NEW DELHI — Thousands of people welcomed India's next prime minister in the capital on Saturday after he led his party to a resounding election victory, with Narendra Modi flashing a victory sign to his supporters and telling them that the win "has created a new confidence among people."

Results announced Friday from the weekslong polls showed that Modi and the Hindu nationalist Bharatiya Janata Party had won the most decisive election victory India has seen in three decades, sweeping the long-dominant Congress party from power.

On Saturday, Modi was greeted by roaring crowds outside the BJP's offices in New Delhi, where he met with the top leadership of the party to discuss the formation of a new government.

In a country where elections usually result in cacophony and not one single roar, Modi pulled off a mandate of staggering proportions, leaving him unfettered to pursue the agenda of economic revival and development that propelled him to victory.

For most of the past two years, Modi, 63, has worked relentlessly to market himself as the one leader capable of waking this nation of 1.2 billion from its economic slumber, while trying to shake off allegations that he looked the other way amid communal riots in his home state in 2002 that killed 1,000 people, most of them Muslims.

The BJP's core belief is Hindutva, Hindu-ness, an unabashed belief in the supremacy of Hindu religion and culture over Christian, Muslim and other minorities. Non-Hindus must accept the predominance of Hindu ethos and culture. Muslims, for whom the BJP holds a particular animus, must be "Indianized," i.e. Hindu-ized. The best Muslim is one who's least Muslim.

Discrimination against Muslims in India is so rampant that many barely muster outrage when telling of the withdrawn apartment offers, rejected job applications and turned-down loans that are part of living in the country for them.

As a group, Muslims have fallen badly behind Hindus in recent decades in education, employment and economic status, with persistent discrimination a key reason. Muslims are more likely to live in villages without schools or medical facilities and less likely to qualify for bank loans.

Now, after a landslide electoral triumph Friday by the Bharatiya Janata Party of Hindu nationalists, some Muslims here said they were worried that their place in India could become even more tenuous.

30 years later, India is now in the midst of rapid socio-economic change. About 13 million young people are entering the job market each year, but not enough jobs are being created in an economy that has slowed down to below 5 percent in the last two years. Prices of food have spiraled, as has unemployment.

For voters, the priorities in this election were no longer bound by old traditional religious and caste allegiances. Instead, jobs and development were their main priority, and after having promised them that, Modi's real challenge lies ahead.

Later Saturday, Modi's victory lap was to see him head to Varanasi, the town on the banks of the Ganges river that is revered by millions of devout Hindus.

Amid the euphoria of the win, his own party tried to strike a note of caution.