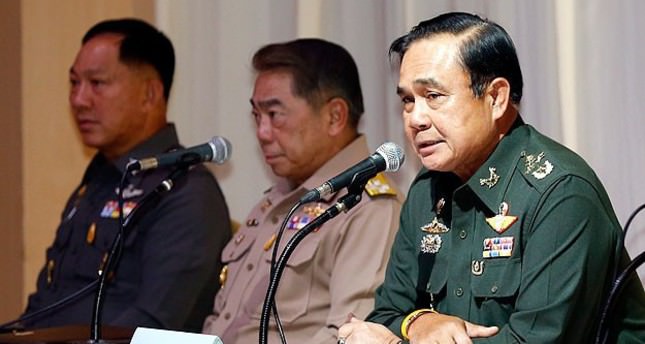 Thailand's commander-in-chief, General Prayut Chan-O-Cha, announced yesterday that the military had seized power from the government after talks by rival leaders failed to reach a compromise that would end the unrest

BANGKOK — Thailand's army chief announced in a televised address to the nation yesterday that the armed forces were seizing power after months of deadly political turmoil.

"In order for the country to return to normal quickly, the National Peace Keeping Committee comprised of the army, the Thai armed forces, the Royal Air Force and the police need to seize power as of May 22 at 4.30 p.m." army chief Prayut Chan-O-Cha said.

The commander-in-chief, who invoked martial law on Tuesday, said the coup was needed to prevent the conflict escalating. "All Thais must remain calm and government officials must work as normal," he added.

The move came after military-hosted talks between the kingdom's political rivals apparently failed to reach a compromise on ending nearly seven months of mass protests on the streets of Bangkok. Rival protest leaders at the talks - held at a heavily guarded military facility in the capital - were seen being taken away by the army although it was unclear whether they had been formally detained.

The long-running political crisis broadly pits a Bangkokbased royalist elite and its backers against the billionaire family of former premier Thaksin Shinawatra.

Thaksin, a former tycoon-turned-populist politician, was ousted by the military in a coup in 2006 but still enjoys strong support, particularly in rural northern Thailand.

His sister Yingluck Shinawatra was dismissed as prime minister earlier this month in a controversial court ruling after months of protests seeking her overthrow.