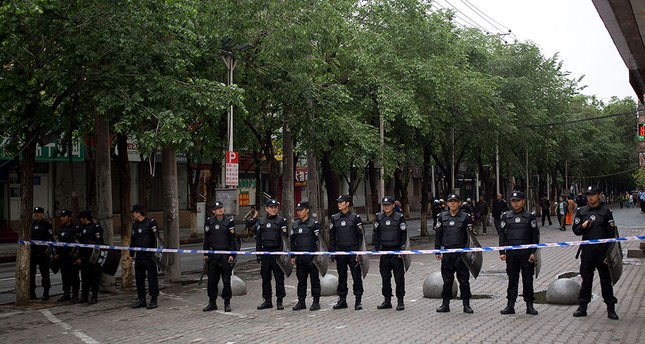 by May 23, 2014 12:00 am
URUMQI, China — A handful of jittery traders set up their stalls Friday near the cordoned-off scene of a deadly attack on a Chinese market which killed 31 people, condemned as terrorism by both Beijing and Washington.

Assailants in two vehicles ploughed into shoppers and traders and threw explosives at a street market in Urumqi, the capital of the volatile Xinjiang region, on Thursday.

The devastating attack was described by authorities as the latest "severe terrorist incident" to hit the far western region, home to China's mainly Muslim Uighur minority.

More than 90 people were also wounded when the two off-road vehicles drove into the crowd, with one of them exploding, an incident with echoes of a fiery car crash in Beijing's Tiananmen Square last year.

Police erected a knee-high barrier at the end of the road early Friday, and elderly shoppers were restricted to patronising the supermarkets that line the street, rather than produce sold by the market traders who had previously set up stalls on the pavement.

A vendor selling hot pancakes at the end of the road, outside the police perimeter, told AFP that they were worried about returning to the area, but had little choice.

"Of course we are frightened. I still remember vividly the sound of the explosions, but what else can I do," said the woman surnamed Xie, as she moulded dough with her hands.

"We have three babies in our family. We cannot let terrorists stop us earning money which helps to support them."

China has seen a series of incidents in recent months targeting civilians, sometimes far from Xinjiang itself, which authorities have blamed on separatists from the vast and resource-rich region.

The United States and the United Nations condemned the violence in Urumqi.

The Global Times newspaper reported Friday that five attackers died in Urumqi, adding it was unclear whether they were included in the toll, and police were investigating whether more accomplices were at large.

About 10 police vans were parked along the street, an AFP reporter on the scene witnessed.

Foreign reporters were being turned away from the scene by police, while there was no sign of domestic journalists, who are often instructed to follow the reporting of official Chinese media on sensitive subjects.

Critics of Beijing's policies in Xinjiang say that tensions in the region are driven by cultural oppression, intrusive security measures and immigration by majority Han Chinese which have led to decades of discrimination and economic inequality.

Graphic images obtained by AFP showed scores of bodies lying in the road after Thursday's carnage, amid pools of blood, scattered fruit and the twisted wreckage of a bicycle.

Some of the shoppers returning to the area on Friday said doing so was an act of defiance.

One elderly woman clutching a bag of spring onions told AFP: "Just because people come here and try to terrorise us, it does not mean I should have food which is not fresh."