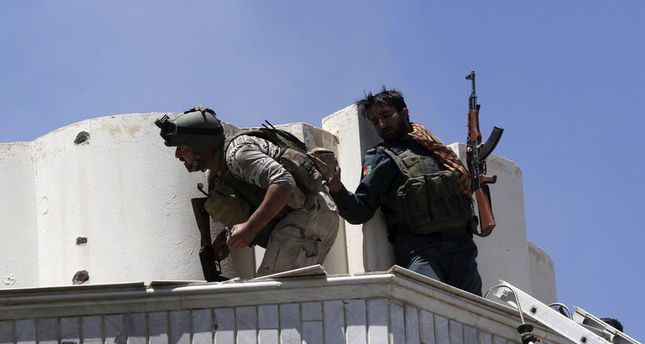 by May 23, 2014 12:00 am
HERAT, Afghanistan — A handful of heavily armed insurgents, including suicide bombers, launched a rocket propelled grenade and gun attack on the Indian consulate in Afghanistan's western city of Herat hours before dawn on Friday, officials said.

Indian staff at the mission escaped soon after the shooting began at around 3 a.m.. Police said Afghan security forces had killed the attackers, who were holed up in buildings overlooking the consulate, following a firefight that lasted several hours.

"They fired a couple of RPG shots. It was dark and they couldn't verify where it was coming from," India's ambassador to Kabul Amar Sinha told Reuters by telephone.

He said there had been around 10 staff resident at the consulate in Herat, which stands close to the border with Iran and is Afghanistan's third largest city.

The attack underscored a worrying security picture as Afghanistan prepares to take over from foreign combat troops after more than 12 years of war against a Taliban insurgency and prepares for a presidential election run-off next month.

The consulate was guarded by a team of commandos from the Indo-Tibetan Border Police. Afghan security forces form an outer ring, an Indian security official in New Delhi said.

It was not immediately clear who was behind the attack and no one claimed responsibility, though suspicion would inevitably fall on the Taliban and other loosely associated groups .

On the other side of the country, in the northeast province of Badakhshan, Taliban fighters were holding 27 police and officials hostage, and dozens of people have killed or wounded.