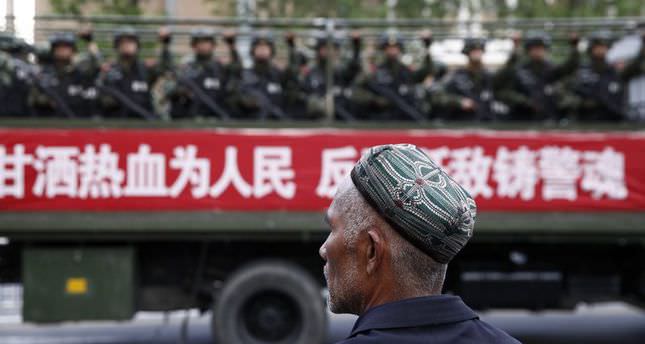 by May 24, 2014 12:00 am
URUMQI — Trucks carrying hundreds of Chinese troops roll through the centre of Urumqi, capital of East Turkestan (Xinjiang). Security has been heightened and police are on alert, just days after one of the attacks in the troubled Xinjiang province.

Chinese state television announced on Saturday that the authorities have launched a one-year crackdown to hunt down and punish militants in Xinjiang. It comes after thirty nine people died and 90 were wounded on Thursday when two vehicles drove into crowds at a market in Urumqi and threw explosives.


In a show of force, China's Minister of Public Security spoke to hundreds of troops and police nearby, inspecting officers on the streets. He also attended a ceremony commemorating the victims of Thursday's suicide attack. Police say they have identified the five suspects. They all appear to be Uyghurs.

East Turkestan (Xinjiang), which is home to the native Muslim Uyghurs has seen a spate of attacks in recent years. Beijing has blamed these - and other recent mass-casualty attacks - on Uighur separatists. It says it is pouring money into the Xinjiang region, but many Uighurs say their traditions and freedoms are being crushed by the government.

Violence is being fueled by discriminatory policies against uyghurs

And in March, 29 people were slashed and stabbed to death at a train station in the southern city of Yunnan blamed on Uyghur extremists bent on waging jihad.

Uyghur activists say the violence is being fueled by restrictive and discriminatory policies and practices directed at Uighurs and a sense that the benefits of economic growth have largely accrued to Chinese migrants while excluding Uighurs. The knowledge that Muslims elsewhere are rising up against their governments also seems to be contributing to the increased militancy.

Thursday's attack came two days after courts in Xinjiang sentenced 39 people to prison after being convicted of crimes including organizing and leading terrorist groups, inciting ethnic hatred, ethnic discrimination and the illegal manufacturing of guns.

Among those convicted Tuesday was 25-year-old Maimaitiniyazi Aini, who received five years in prison for inciting ethnic hatred and ethnic discrimination for comments he made in six chat groups involving 1,310 people, the Supreme Court said.