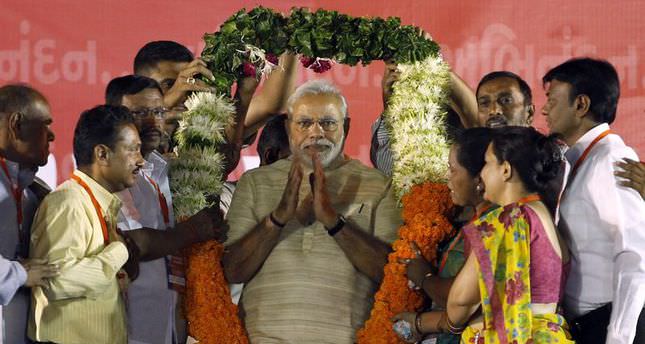 by AA May 24, 2014 12:00 am
ISLAMABAD —Pakistan's Prime Minister Nawaz Sharif will attend the oath-taking ceremony of India's Prime Minister-designate Narendra Modi on May 26 in New Delhi, Pakistani Foreign Ministry has said.

The visit is seen as a fresh development in Pakistani-Indian relations.

Sharif was the first foreign leader to congratulate Modi on his victory, and invited him to visit Pakistan. Returning the goodwill gesture, the Indian Prime Minister-elect invited his Pakistani counterpart to attend his oath-taking, a move welcomed by politicians and peace activists who otherwise appear to be skeptical about future relations between the two arch nuclear rivals.

Foreign Ministry Spokesperson Tasneem Aslam said Saturday, the schedule of Sharif's visit was being finalized in consultation with Indian Foreign Ministry and Sharif's adviser on national security, Sartaj Aziz, was likely to accompany the prime minister.

A stop-start peace process between the two countries, which have fought three full-fledged wars and the three-week long Kargil skirmish in last 66 years, hit snags in November 2009 after the deadly Mumbai attacks that killed more than 150 people.