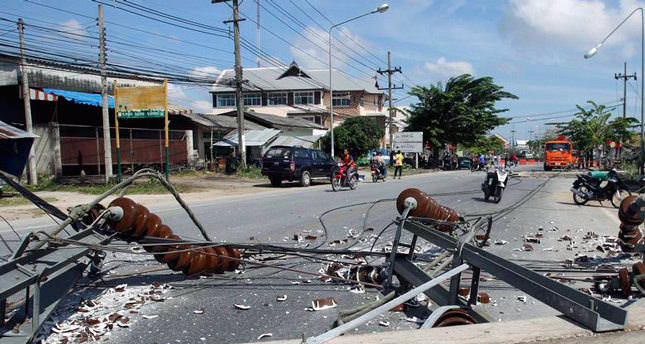 by AA May 25, 2014 12:00 am
BANGKOK — Muslims in Southern Thailand were in shock Sunday, after a spate of almost simultaneous bombings killed three people and injured 63.

Pattani province's police chief, General Pot Suaisuwan, told on Sunday that 12 violent incidents had rocked the region Saturday.
While most of the bombs exploded in front of small convenience stores, as well as at a gas station, several grenades were also fired at a police booth and a navy boat. A gun battle took place near a provincial electricity office.

Although no one has claimed responsibility for the attacks, authorities often attribute such incidents to a separatist movement that resurfaced in 2004.

While the Thai military is preoccupied in Bangkok after having seized control of the country Thursday, insurgents may have seen an opportunity to launch the series of attacks.

The region witnessed a marked increase in the number of violent incidents in May. Hat Yai - the region's largest city – was shaken by four bombs that injured eight people May 6. Five days later, a Muslim woman was killed in one of around 10 blasts in Narathiwat and Yala provinces.

Thailand's three Muslim-dominated southern provinces of Yala, Pattani and Narathiwat have been wracked by a Muslim insurgency since Siam (the name of Thailand pre-1939) took control of what was then a Malay Sultanate following an Anglo-Siamese treaty in 1907.

The insurgency became a full-blown civil war in the 1960s when the Bangkok government tried to control education in the region's Islamic schools.

In January 2004, a rejuvenated insurgency movement launched a series of attacks that shook up the Thai State. Since then bomb attacks, drive-by shootings and ambushes have happened on an almost daily basis; almost 6,000 people – Buddhists and Muslims, military, teachers, civil servants and civilians – have been killed and 10,700 others have been wounded.

In February 2013, for the first time, the Thai government began a dialogue process with representatives of the insurgency, with Malaysia acting as a facilitator. But the talks were suspended in December when the political crisis in Bangkok intensified and the national assembly was dissolved.

Since Thursday's coup, the military junta running the country has not given any indication that it would reactivate the dialogue.