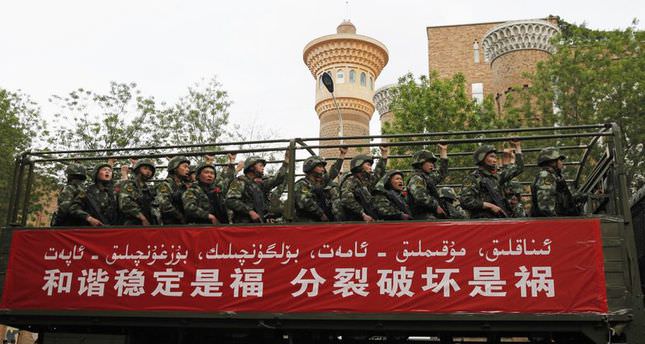 by Anadolu Agency May 26, 2014 12:00 am
BEIJING — Chinese police in East Turkestan (the far western region of Xinjiang) have taken down 23 "terror and religious extremism groups" and caught more than 200 suspects in May, state media said.

A yearlong ''anti-terrorism'' campaign - focusing on Xinjiang, home to the Turkic Uyghur Muslim ethnic group - was launched by China's central government Friday and will be in effect until June 2015. Beijing blames on "separatists" (freedom supporters) from the region.

The campaign came after Thursday's attack, in which 39 people were killed and 94 others injured when two off-road vehicles ploughed through a market in regional capital Urumqi. Witnesses said that explosives were thrown from the vehicles, which later blew up.

East Turkestan (Xinjiang), which is home to the native Muslim Uyghurs has seen a spate of attacks in recent years. Beijing has blamed these - and other recent mass-casualty attacks - on Uyghur separatists. It says it is pouring money into the Xinjiang region, but many Uyghurs say their traditions and freedoms are being crushed by the government.

'Violence is being fueled by discriminatory policies'

Uyghur activists say the violence is being fueled by restrictive and discriminatory policies and practices directed at Uighurs and a sense that the benefits of economic growth have largely accrued to Chinese migrants while excluding Uighurs.

The knowledge that Muslims elsewhere are rising up against their governments also seems to be contributing to the increased militancy.