India's Modi to be sworn-in as PM Monday 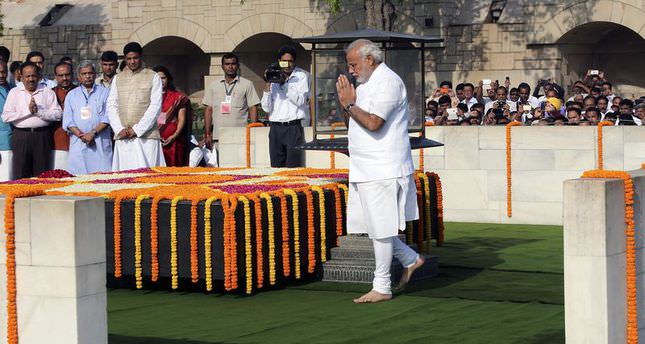 by AA May 26, 2014 12:00 am
NEW DELHI — The forecourt of India's Presidential Palace wore a magnificent look as as the hectic preparations for the oath-taking ceremony of India's 15th prime minister, Narendra Modi, were completed Sunday evening with 4,000 expected guests including state dignitaries.

Pakistani Prime Minister Nawaz Sharif will be in the spotlight as he will be the first foreign leader to hold a bilateral meeting with the new prime minister Modi on Tuesday signalling a thaw in relations between the two nuclear arch-rivals.

Monday's constitutional ceremony will be India's biggest state event to be held at the Presidential Palace in which Modi, the top leader of Hindu nationalist Bharatiya Janata Party, will be administered oath by President Pranab Mukherjee along with his Council of Ministers.

All 777 members of both houses of the Indian parliament, chief ministers and governors of all states and ministers of outgoing Congress party-led government have been invited for the ceremony.

Heavy security arrangements have been made for the ceremony with nearly 10,000 security personnel pressed into service for the event which will start at 6pm Monday and will last one hour and ten minutes followed by a banquet by the president.

Speculations were on the rife about the possible allotment of key portfolios of home, finance, defense and foreign ministries as the BJP did not reveal the names of probable ministers in Modi's government. The list of ministers will be sent to the president early Monday.

Modi's invitation to his Pakistani counterpart Sharif has not gone down well with Shiv Sena, a right-wing Hindu party, part of the BJP-led National Democratic Alliance (NDA) government, as the party has repeatedly opposed talks with Pakistan in the past unless it ends the "cross-border terrorism."

Shiv Sena party chief Uddhav Thackeray said in a statement Sunday: "The cries of our martyrs' families ring in my ears. India has always extended a friendly hand towards Pakistan but it hasn't reciprocated. We (Shiv Sena) trust the firm and decisive leadership of Narendra Modi and do not wish to put obstacles in his way at the very start of his term."

Similarly, south Indian state of Tamil Nadu has reacted strongly against the invitation to Sri Lankan President Mahinda Rajapaksa whom the state political parties accuse of violating human rights and committing war crimes against Tamils in island country in its war against the Liberation Tigers of Tamil Eelam (LTTE).

Jayalalithaa, chief minister of Tamil Nadu, has decided to boycott the sworn-in ceremony reportedly to register her protest against the Sri Lankan president. Three regional parties of Tamil Nadu, which are part of Modi-led NDA government, have opposed the invite to Rajapaksa.

Earlier, both Pakistan and Sri Lanka have freed jailed Indian fishermen who they said had crossed into their territorial waters as a goodwill gesture before Modi oath-taking ceremony.

The Sri Lankan government's move to release the jailed Indian fishermen is seen as an attempt to quell criticism in Tamil Nadu state.

Despite the opposition by the allies, Modi-led BJP has remained firm as the party has got enough number of seats on its own to run a smooth government.