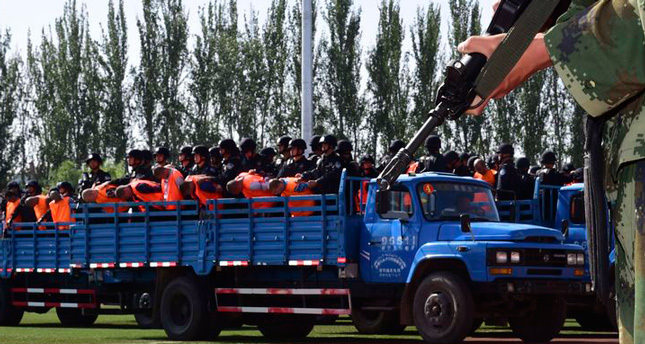 by Anadolu Agency May 28, 2014 12:00 am
URUMQI — Local officials in China's western Xinjiang (East Turkestan) region held a public rally for the mass sentencing of criminals on Tuesday, handing out judgments for 55 people and at least three death sentences for crimes such as "violent terrorism", state media said.

The public sentencing, reminiscent of China's revolutionary era rallies, attracted a crowd of 7,000 at a sports stadium in Ghulja in the northern prefecture of Yili.

Photos showed packed stadium bleachers and trucks parked on the sports field loaded with prisoners in orange vests being guarded by armed police.

The mass trial follows a similar event last week in the region where 39 people were sentenced to jail on similar charges.
China is waging a year-long anti-terrorism operation nationwide after a series of attacks, but has focused on East Turkestan, home to a large Muslim Uyghur minority.

The latest prisoners were sentenced for a range of crimes, including intentional murder, separatism, and leading or participating in terrorism groups, People.cn, the website associated with the ruling Communist Party mouthpiece, the People's Daily, said on Tuesday night.

The public spectacle was originally reported by the official Xinhua news agency, but links to the story appeared to have been taken down.

China has said five bombers carried out an attack at a morning vegetable market in East Turkestan's capital of Urumqi on Thursday, which killed 39 people and injured 94.

It was the second attack in Urumqi in just over three weeks, after a bomb went off at a train station in late April, killing a bystander and wounding 79.

Exiles and rights groups say the real cause of the unrest is China's repressive policies that put curbs on Islam and the culture of Uyghurs, Muslims who speak a Turkic language. Uyghurs have long complained of official discrimination in favour of the Han, China's majority ethnic group.

Individuals named in the report on the latest sentencing rally all appeared to have Uyghur names.

Human Rights Watch said many times that serious violations of due process that compromised the possibility of fair trials for the defendants, including restrictions on legal representation, overt politicization of the judiciary, failure to publish public notification of the trials, and failure to hold genuinely open trials as mandated by law - all chronic problems in China's judicial system.